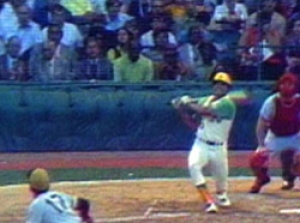 Elected by the fans to the starting lineup for the American League were Rod Carew (second base), Luis Aparicio (shortstop), Brooks Robinson (third base), Carl Yastrzemski (left field), and Frank Robinson (right field).

Amazingly, those not selected to start, but were chosen as reserves were Harmon Killebrew, Reggie Jackson, and Al Kaline. Can you imagine where Killebrew, Jackson, and Kaline would not be in your starting lineup?

Jim Palmer was the lone pitcher to make it to the Hall of Fame from that squad.

The National League pitching staff included, get this, Tom Seaver, Steve Carlton, Ferguson Jenkins, and Juan Marichal. And none of them started! Some guy named Dock Ellis got that honor.

Oh…and also a part of that NL squad was the starting third baseman Joe Torre. But he did not make it to the Hall as a player – although his stats are better than many of his peers – rather he made it to the Hall as a manager. And there was one other person who was at that game, an icon who will probably never get to the Hall of Fame as that debate rages on…Pete Rose. He, too, did not start that game, regardless of the five different positions he played.

I remember that game 50 years ago. I still have the scorebook with the starting lineups written in it. What do I remember most from that game? I vividly can see a guy wearing an Oakland A’s uniform, with the No. 9 on his back, absolutely crush a pitch off of Dock Ellis in the third inning, and hit the light tower on the roof in right-centerfield of Tiger Stadium. That was before Reggie had become Reg-gie!

Oh…and a couple of other guys hit home runs for the AL in that game too – Harmon Killebrew and Frank Robinson.

The game has changed, and so has the mentality surrounding the game. Whether it be strategy in the game of baseball itself, or the way players are coddled, and their attitudes are much different than those who paved the way for them. Not only was it an honor to be chosen to play in the All Star Game, a lot of players actually needed the money that they received for being chosen to go to the Mid-Summer Classic. And even when there were two games that were played, the players still went. They wanted to go.

Today players feel the need to “take a break” and just “get away from it all.” I have a hard time thinking any of those players in 1971, even those who didn’t get to the Hall of Fame, would consider passing on the season’s All Star Game. And when you talk about the “greatest of all,” is what is being showcased this year really the greatest of all?

More in this category: New York Mets have had some pretty good dads playing too »
Login to post comments
back to top