So Long to Hammerin' Hank 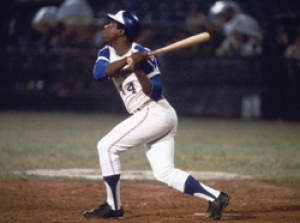 April 8, 1974...I remember exactly where I was and what I was doing. I was actually working on a class project for English that I was doing with my friend Dave Cavanaugh. But I was paying more attention to Al Downing throwing a pitch that would ultimately be hit and land beyond the outfield fence in the glove of Tom House.

That project included an audio tape and Dave and I were late with the project and sort of...sort of...told a fib to our teacher about when we had completed the project. What happened on that date was captured on that tape and could be heard in the background. Dave and I were caught by Mrs. Pellecchia. So I am not sure if I remember that event more because of what happened to us...or because of what that event meant to some guy with the quickest wrists I have ever seen - Hammerin' Hank Aaron.

The year 2020 saw so many iconic players from my childhood taken - Hall of Famers Al Kaline, Tom Seaver, Lou Brock, Bob Gibson, Whitey Ford, Joe Morgan, and Phil Niekro; and "should be" Hall of Famer Dick Allen. Then 2021 starts off with the passing of Don Sutton and now Henry Aaron.

Obviously, all of the Hall of Famers were special. They had to be...that's why they ARE Hall of Famers. But Aaron was a special kind of special. Because so much time has passed, and Jackie Robinson is known to be the one to break the color barrier and endure so much, it's not as well known what Aaron had to endure while he chased, and surpassed Babe Ruth. Roger Maris received death threats while chasing and eclipsing Ruth's season mark of 60. Aaron had to endure so much more because of racial strife.

His stats speak for themselves. Truly. Ponder this...he played 23 years...he hit 755 home runs. He never...NEVER...struck out 100 times in a season. He actually walked more times than he struck out in his long career and hit for an average of .305. I never heard of exit velocity or launch angle ever mentioned when discussing Hammerin' Hank.

I remember a home run he hit off Gary Gentry in Game 3 of the National League Championship Series in 1969. I was there at Shea Stadium. I can see it...I can hear it. It was a BOMB! I had never seen a ball go out of the ballpark like that. Nolan Ryan...before he was THE Nolan Ryan...would come in after that and shut down the Braves. But that home run left a huge impression on this young Mets fan.

More in this category: « Mets Forced To Fire Another New Hire
Login to post comments
back to top