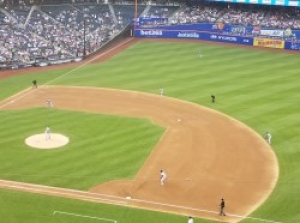 Dad Dante was an outfielder built more like a Sunday softball player, a big, strong, barrel-chested powerhouse. He was in the Majors for five years with the Angels and the Brewers until he came to the Rockies and blasted opposing pitchers for seven years at Coors Field. In his seven seasons in Colorado, the four-time All Star hit 201 home runs, drove in 826 runs and hit for a .316 average. In 1995, Dante led the league in hits (197), HR (40), RBI (128), and slugging percentage (.620). Dad finished with a career .299 batting average, hit a total of 274 home runs, 1174 RBI and struck out more than 100 times only twice in 14 seasons.

Son Bo, sporting Dad’s No. 11 that he wore when he first came up to the Majors, other than being a long-ball threat, appears to be nothing like his dad. Bo is a quick, slick-fielding shortstop who came up to the Jays in 2019. Over parts of three season, in 170 games, Bo is averaging .301 at the plate and has clubbed 33 homers. In 2021, he is hitting at a .296 clip with 17 HR and 65 RBI. Now those are numbers that look like they could belong to Dante.

Dad Craig was a truly amazing athlete. He broke into the Major Leagues at the age of 22 after starring as a catcher at Seton Hall University. And although he broke in as a catcher and spent three seasons behind the plate where he won a Silver Slugger award, he moved to second base for the next 11 seasons, winning four Gold Glove awards, five more Silver Slugger awards, and was named to the NL All Star team seven times. Craig went on to play two seasons in centerfield before returning to second base to finish out his 20-year career. Craig collected over 3,000 hits, finishing with a batting average of .281, 291 HR, 1,175 RBI, 414 SB, and led the NL in HBP five times (285 total) on his way to the Hall of Fame.

Like his infield mate Bo, son Cavan came up in 2019. Cavan, sporting the No. 8, one digit more than his dad’s No. 7, is unlike his dad in that he hits from the left side of the plate. In parts of three seasons since coming into the league, Cavan, who like his dad has played both infield and outfield, has hit 31 HR, driven in 101 runs, and stolen 23 bases. However, he has struggled a bit to keep his average up, sporting a .236 average in his brief career. Thus far in 2021, Cavan is hitting .224 with 7 HR, 25 RBI, and 3 SB, proving It’s sometimes tough to live up to your dad’s name.

Dad Vlad…the senior Guerrero…was really a joy to watch. I didn’t care that he played for a Mets rival in the division when he was with the Expos. And I loved when the Angels would be in town to play the Yankees so that I could see Vlad, Sr. play. He was an old-fashioned “see the ball, hit the ball” type of hitter. It didn’t matter where the pitcher threw the ball…he would swing and somehow…SOMEHOW…put a good part of the bat on the ball and hit it…and hit it with authority. He was a 9-time All Star, 8-time Silver Slugger and was the 2004 American League MVP. It is absolutely mind-boggling how he never won a Gold Glove for his play in right field. His arm was amazing and it was fun to watch players try to go first to third and see Vlad, Sr. gun them down with his bazooka attached to his right shoulder. It got to the point that players simply just wouldn’t even take a chance. He finished his career with 126 outfield assists.

It would be great to hear those three families gathered around the dinner table, huh?

New York Mets had some interesting father and son teams.

Second Base – Roberto Alomar (Sandy Alomar, SS, Angels and 15 games with the Mets)

In most cases, you could say that the sons outplayed the fathers. Perhaps with the exception of the McCraes (Hal was a much better hitter than Brian) and the Bannisters (southpaw Floyd had more success than his righthanded son Brian). The Alous were probably about even as Felipe had a pretty good reputation as a hitter long before Moises came along.

And the only father and son combination to play for the Mets were the Alomars. Dad Sandy played a mere 15 games in a Mets uniform and although son Roberto spent two years for the Mets, those two seasons were less than amazing for the Amazins. None of the dads of the Mets were Hall of Famers, but the sons can at least boast one member of the Hall, which is, of course, the aforementioned Alomar.

Hey Dad…you wanna have a catch? That line still gets me every time.

More in this category: « All Stars Can't Compare to 50 Years Ago
Login to post comments
back to top