The calendar turned, it's September 1, and that means the rosters expand. The Mets will be getting some extra bodies in the clubhouse to aid in the stretch run.

Welcome back Steven Matz...Kevin Plawecki...Eric Campbell...Kirk Nieuwenhuis...Erik Goeddel. Lucas Duda and Bobby Parnell will be back as soon as they are feeling 100% from their stint on the disabled list. Logan Verritt will return once the allotted time is over for his stay in Las Vegas. And Eric Young, Jr. has been brought back to the organization to provide some much-needed speed. It will all make for some exciting September baseball and an intriguing decision on how to construct the post season roster. 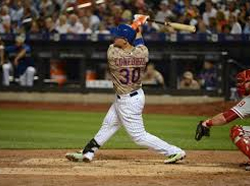 After the Mets road trip that had them looking like the old Milwaukee Brewers that were affectionately known as Harvey's Wallbangers, they came back to CitiField and looked like the Mets of old facing the Red Sox over the weekend. Matt Harvey, Jacob deGrom, and Noah Syndergaard each pitched well enough to win...especially Harvey...and especially if they had hit even remotely close to the way they did on the trip. But the Red Sox cooled off the Mets juggernaut and the Mets were lucky to get out of the three-game series with a win of the final game.

Terry Collins said the Mets were tired after the trip. Road trips are always tough and tiresome, especially when you are circling the bases as much as the Mets did. And the Phillies coming in to CitiField to end the terrific month of August seemed like it would make for good medicine. But the Phillies had other ideas as starter Jerad Eickoff was throwing blanks at the Mets hitters.

The 42-year-old Bartolo Colon put on a display that would belie his age...going head to head with the much younger Eickoff. In the top of the fifth inning of a scoreless game, Eickoff spanked a two-out single to right field. Colon would come back to retire the next batter and leave him stranded. In the bottom of the inning, Michael Conforto would deliver a laser beam to the opposite field to give Colon a 1-0 lead. After an out by Wilmer Flores, Colon came up with two outs and stood at the plate looking like he was just going to stand there with the bat on his shoulder and be satisfied to head back to the mound with the 1-0 lead. On the second pitch, Colon swung and lined one right back through the box into centerfield for a single of his own. Yeah...I'll show you who's tired young man! And HIS two-out single meant a lot more than Eickoff's two-out single because...Curtis Granderson came up and sent one into the night sky and into the direction of the Shea Bridge to give Colon a 3-0 lead that he would not reliquish in eight masterful innings. And this came after the old man threw an inning in relief on Saturday. Who's tired?

The Mets are engergized...maybe too energized. Being at the game you can see things you can't see on TV. The Mets success at Coors Field and Citizens Bank Park may not have been the best thing for them fundamentally...even though it may have done a world of good psychologically. The Mets seem to have long swings now. It almost appears that they are trying to jack every pitch out of the park. I was able to see up close the sweet, compact swing of Conforto. He appears to be the real thing...and not this generation's Mike Vail. After the game, he was asked about his thoughts. His reply? "I am just going up there with the philosophy of 'see the ball, hit the ball.'" It looks like some of the hitters have gotten away from that. Places like Coors Field and Citizens Bank Park will make you do that.

If the Mets are tired, you couldn't tell from the oldest member of the squad. It's the month of September and the Mets are in first place, 6 1/2 games ahead of the second place Nationals. September is the month when it gets fun and exciting. How could you not feel energized? Don't ask Bartolo Colon.