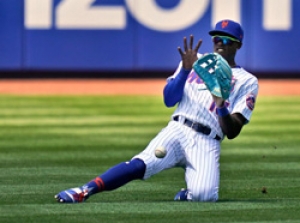 Decimated by injuries, the New York Mets seem like they are playing spring training games rather than the regular season – young players who have little to no experience, older players who have long since been in the Major Leagues and are hanging on for one last hurrah, uniform numbers that are more fitting for football tight ends and wide receivers.

The pitchers? Well, we had a scare, a nightmare actually, with Jacob deGrom. But, for now, it appears he is okay after his return for his five-inning stint this week after 10 days on the IL. However, the bad news is that the triumphant return of Noah Syndergaard will have to wait as he has had a setback that will derail his comeback for quite some time. Taijuan Walker was such a wonderful surprise and then he had the rug pulled out from under him. Carlos Carrasco is nowhere close to returning…if that is what you would call it since he hasn’t pitched yet for the Mets. Seth Lugo is still a ways away and then there is another missing former Yankee, Dellin Betances.

The Mets have been covering things up with a patchwork quilt.

Although positioned near the top of the division for the last few weeks and during the injury epidemic, it feels like the team has been doing it with smoke and mirrors. The group of pitchers, which is being called a “staff” for lack of a better term at this point, has done a yeoman’s job at keeping the Mets in the ballgames with a few exceptions.

But the offense has been dreadful. The team batting average is a resounding .224, 14th in the NL out of 15 teams, and they lead the league in strikeouts…not the pitchers, but the hitters…striking out at an astounding clip. With the exception of Nimmo and Davis, the “regulars” weren’t exactly faring too well before they ended up in the trainer’s room and on the IL, with not one of them hitting over the .242 mark and Alonso leading the team with a mere six home runs two months into the season.

The Mets were believed to have had a bench loaded with experience…and players ready to step in and play every day when needed.

Pillar was actually lighting it up offensively and playing well defensively, rejuvenating his career, until getting hit in the face with a fastball sending him to the IL. Jonathan Villar started out hot and then has fizzled offensively, although he has still sparkled defensively. And before he crashed into a wall, Almora was struggling mightily going 1-21 with eight strikeouts.

So with so many regulars, and their replacements, taking up space in the trauma center, what can you do?

Bring up highly-touted rookie Kalil Lee who came over in the winter three-way trade with the Boston Red Sox and Kansas City Royals. We heard his name over and over again. And he has been overwhelmingly overmatched going 1-17 with 12 strikeouts…although the one hit did turn out to be a game-winner. But it’s almost embarrassing…I feel for him…but he doesn’t belong in the Major Leagues…not yet anyway.

So then go in the other direction?

Bring in the greatly experienced and well-traveled veteran Cameron Maybin, two seasons removed from being a valuable and productive role player for the Yankees. Obviously, he was riding on fumes in Triple A with the Chicago Cubs, and he is clearly bone dry now. After being rescued from Triple A Iowa where he was hitting .103, Maybin is off to an 0-26 start with 12 strikeouts, missing pitches by wide margins, misplaying balls in the outfield.

And all of this only exacerbates the fact that Francisco Lindor is under the Mendoza Line at .185. Even Dominic Smith has looked lost at the plate hitting .246 with just two dingers.

It’s an amazing thing to watch. Actually, it’s a painful thing to watch. It’s not like similar situations are not happening elsewhere around baseball. Injuries are running rampant.

But you have to wonder, why so many injuries, and why does it appear that there is such a lack of talent on the horizon? Wasn’t there some guy named Jarred Kelenic on his way? Oh…no…forgot about that. He was exchanged for some guy who is, guess what, not playing this season. Kelenic is struggling himself, hitting a whopping .145 with two home runs. What about top pitching prospect Matt Allen and top outfield prospect Pete Crow-Armstrong? Oh…yeah…add those two to the list who won’t be seeing any action for a while.

The Mets are in first place only because the rest of the Eastern Division is just as bad off, if not worse than they are. The cupboard is bare.  Patience is running thin…along with the Mets roster.

More in this category: « The Mets Were Once Forced To Have Three Catchers In The Starting Lineup
Login to post comments
back to top