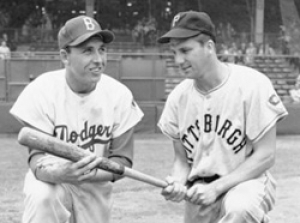 Two men who are loved by New York Mets fans, enjoyed similar successes, and suffered similar frustrations. But each, eventually, received the respect and adoration that they so very much deserved.

Ralph Kiner and Gil Hodges crossed paths many times on the ballfields of Ebbetts Field in Brooklyn and Forbes Field in Pittsburgh, as teammates on the National League All Star team, and then both playing significant roles in New York Mets lore.