Ya Gotta Believe? Well...ya just gotta believe now. Watching the Mets celebrate their clinching of the Eastern Division title has to make fans feel really good about the way things have turned out. Especially when things looked rather glum in May, June, and the beginning of July. But with all of the anxiety, all of the complaining, and all of the people calling for heads to roll, the Mets have taken the first step on their way to a post-season berth for the first time in nine years.

There is a lot to figure out over the next seven games that remain for the regular season. But for now, it is a chance to revel in the victory. 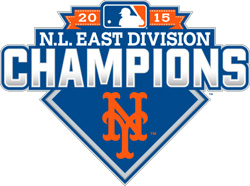 Watching the post-game interviews, you could see the overwhelming emotions felt by a number of the players and Terry Collins. You can't help but feel good for Collins...who had to endure the really bad times and listen to people question whether or not he was the one to lead them to a division title. You have to be happy for David Wright whose career appeared to be over after being diagnosed with a serious back condition. You have to be thrilled for Wilmer Flores who appeared on the way out but became a symbol for the heartfelt emotions of the players who feel such a loyalty to this team.

And when you sit back and think about it, after all is said and done, Sandy Alderson kept his promise. The Mets GM said the Mets would be playing meaningful games late is the season in 2015 and you can't get anymore meaningful than a title-clincher. Oh, but wait, I guess you can. Because the post-season is just around the corner.

Michael Cuddyer, a veteran of many post-season appearances with the Minnesota Twins, when asked about a comparison of this team to prior post-season squads he's played on, he made it clear that no team had ever had the kind of power pitching that the Mets possess. He said an arsenal of power pitching is what makes teams winners in the post-season.

When Yoenis Cespedes was asked what excited him about coming to the Mets in the deadline trade, his answer was simple - "The pitching."

So perhaps "the pitching" will do what the staffs of 1969 and 1986 did. That's something to hang our hats on. But for now we can celebrate that we really are off to the post-season.