Kershaw Keeps the Champagne from Flowing at Citi Field

The Mets have a stable of talented pitchers. But it seems like the Dodgers have reincarnated Don Drysdale and Sandy Koufax. While the Mets can boast a staff of Matt Harvey, Jacob deGrom, Noah Syndergaard, Steven Matz, and even a Zack Wheeler down the road, the dynamic duo of Clayton Kershaw and Zack Greinke have to make you think that the Dodgers have a little mound magic of their own.

It was bound to happen that Kershaw's post season woes would suddenly disappear. And they did. On three days rest the reigning Cy Young and MVP awards winner showed exactly why he is deserving of both. Kershaw took matters into his own hands and shut down the Mets in their home ballpark and enabled the Dodgers to force a sudden death Game 5 back in Los Angeles. 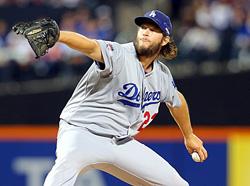 Steven Matz actually pitched well for the Mets...except for a small hiccup in the third inning which was started by a two-strike base hit off the bat of...yes...Kershaw which led to a three-run rally. None of the hits were hit all that hard...but it didn't matter. Kershaw did it all by himself and got the Dodgers back off the mat to pull them even in the series.

Now the Mets will have to face Greinke, yet again, at Dodger Stadium, on his own turf. A tall task for any team. But the Mets penchant for striking out gives the Dodgers pitchers even more of an advantage that they don't even need. And it will be a 5:00 p.m. start for Game 5 so you can pretty much bank on the fact that the shadows won't help either.

It will be up to Jacob deGrom to go toe to toe and pitch for pitch with Greinke. deGrom should be well-rested and he ususally is pretty even-tempered so that the atmosphere shouldn't get to him too much. He proved in Game 1 that he was up to the task. It will be interesting to see how he responds in a Game 5 when the tables have actually been turned. The Mets had the Dodgers backs against the wall after the Game 3 victory. But Kershaw single-handedly turned things around with his performance in Game 4.

So while I still believe...and it pains me to say this...you have to think that it is now "Advantage...Dodgers."