Granderson Leads Mets To Put Dodgers On The Brink

It was the first post season game at Citi Field and the roar of the crowd, more often than not, was some rendition of showing of disdain for Chase Utley. But there was plenty to make noise about thanks to the Mets offense as Curtis Granderson led the attack on the Dodgers pitching staff with two booming doubles that drove in five runs.

Travis d'Arnaud and Yoenis Cespedes both had three hits, each hitting a home run and driving in three...Cespedes hitting a three-run bomb into the second deck to lead the Mets to a 13-7 victory.

Matt Harvey did not have his good stuff...he was very hittable...but he battled through five innings and left with a 10-3 lead. 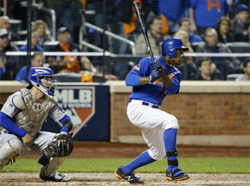 Cespedes' shot had everyone ooohing and aaahing, and deservedly so. But it seems that it is going unnoticed how much of an impact Granderson has had on this team. He has been having a very productive series to follow up on his fine season.

With all of the talk about Cespedes' impact since he arrived on the scene, and how impressive Jeurys Familia has been since being named the closer early in the season, Granderson has been the steady, fairly consistent presence in the lineup all year. He may not be the prototypical lead-off hitter - he doesn't steal a lot bases - but he has transformed himself into a solid top-of-the-lineup hitter. He works deep into counts, he gets on base, and he hits a lot of homers from the lead-off spot. Granderson has also nullifiedhas shown that he is not susceptible to the Dodgers' lefty pitching in the series.

The Mets will now have their hands full as they will have to beat either Clayton Kershaw, again, or Zack Greinke in order to move on to the National League Championship Series. Seems like it could be a tall order. But if Granderson stays hot and continues setting the table...he could also help set the stage for an appearance in the NLCS.