What's Wrong With The Mets?

In high school I actually wrote a term paper titled "What's Wrong With the Mets?" It was 1976 and the Mets were dreadful. The only bright spots they had at that time were the fact that Tom Seaver and Jerry Koosman were still toiling with some success and Dave "Kong" Kingman was hitting moon shots out of Shea Stadium. My English teacher who assigned the paper was not at all pleased. But the fact that she was also the advisor to the school newspaper and I was a budding sportswriter and aspiring sportscaster, she gave me a bit of leeway with the subject matter. I was always that obsessed with the Mets. 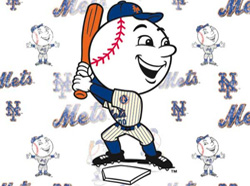 The Mets, with all of the excitement about their play while going 7-1 on the recent road trip, are not infallible. Really, no team is, other than the Cardinals it seems. All of the teams in the major leagues have shown that they have weak points. And the Mets, even recently, are no different. It makes you wonder what if the Nationals weren't having such a putrid run? The team that was supposed to be the team to beat in the NL East has just been downright awful.

The Mets, with all of the scoring and power numbers recently, have still shown an inconsistency at the plate, swinging at pitches out of the strike zone and striking out way too often. If I were an opposing pitcher, I would just keep pumping in sliders low and away just off the plate to right hand hitters and splitters low and inside to the lefties. It seems, especially when the Mets hitters are hot, they go fishing for those pitches and there are a lot of swings and misses. But, hey, the team is hitting and went from last in hitting in almost every category to leading the league in almost every category for the last three weeks.

The true weakness which is so very evident is the middle relief. Terry Collins has nobody that he can rely upon to bring in to bridge the gap from the starters to the back end of the pen with Tyler Clippard and Jeurys Familia. The starters, with the exception of a few hiccups, have been phenomenal, and Clippard and Familia have been superb. However, with pitch limits and innings limits, and length of season, the starters can't be so relied upon that they will run out of gas by mid-September. And Clippard and Familia can't be used every game. Rubber arms are one thing. Dead arms are another.

Sean Gilmartin has actually done a yeoman's job and was really the key to two Mets wins during the recent surge. But he is a lefty who is really not a lefty. That means he is so much more effective against righties than he is against lefty hitters. Sandy Alderson brought in Eric O'Flaherty and he has been terrible...absolutely terrible. A lefty specialist who can actually GET lefthanded hitters out is such a priority today. And the Mets have two good ones - but they are both out for the year with injuries.

OK...so that is really what is "wrong" with the Mets right now. But there is also a lot that is right with the Mets. What makes them so different than they were, say, on July 1? Well there are currently 10, that's right 10, players on the active roster that were not in uniform on July 1. Here's the change over:

OK so the fact that Parnell is on the list is not fair because, in reality, he should never have been rushed back from his surgery. He should have been given all of the time and coddling that all the other rehabbing pitchers have gotten. But the reality is that the Mets were desperate for bullpen arms. And with so many of their quaility arms still in the recovery stages, they were hoping that Parnell could be at least a little bit of himself. Unfortunately that was a bust.

But the fact is the dynamics of the team has changed. There has been a 40% turnover of the roster. The Mets are no longer saddled with a bench that had not one member hitting above the .200 mark on July 1. There has been an infusion of veteran talent, winning know-how, and great clubhouse presence.

The team had been treading water, beating up on the really bad teams, and taking advantage of the Nationals poor play. Alderson, with the exception of O'Flaherty, has made some damn good modifications to the squad. And everyone is getting a chance to play and everyone is taking each opportunity and showing a level of productivity that hasn't been seen in quite a while. The pressure is off and it is actually fun to watch this team for the first time in many years.

And it is true that the hired guns brought in by Alderson - Cespedes, Uribe, Johnson, Clippard - are all rentals. But why think about next year? We should all enjoy this while we can. Worrying about where to put Steven Matz when he is ready is a good thing to worry about. Worrying about getting Harvey, deGrom, and Syndergaard into the post-season unscathed is a good thing  to worry about. There will be plenty of time to be concerned with off-season signings during the hot stove period. We're not even done with the dog days of August. It will be winter before you know it and perhaps then I will write my next version of What's Wrong With the Mets?