Boys Will Be Boys

You know things are getting serious when benches start clearing during a baseball game. It's not everyday you see a basebrawl but then the Phillies have Larry Bowa in their dugout so you can just about bet something is bound to happen. I am just surprised there was no incident the night before when the Mets were hacking their way to hitting a team-record eight home runs...especially with Bowa in the opposing dugout. 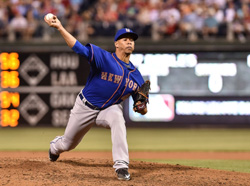 There was a time when it was simply expected to get some hefty chin music after a couple of home runs, and it was money in the bank if one "struck a pose" at the plate before beginning their home run trot. That's old-fashioned baseball. And, of course, Bowa is an old-fashioned baseball mind so it was quite interesting that each Philadelphia pitcher that was trotted out to the mound to share in the 16-7 shellacking never took umbrage to any of the Mets hitters hanging out over the plate and taking whopping batting practice swings. And it STILL didn't happen when Yoenis Cespedes continued the barrage with a two-run blast in the top of the first inning of the very next game.

Perhaps it was the fact that after the Mets grabbed a 3-0 lead, the Phillies tagged Noah Syndergaard for two two-run homers to take a 4-3 lead and it was a tight game. But the Phillies are in last place, the game really means nothing to them, so you would think that the time was ripe for a plunking. But other than Phillies starter Jerome Williams throwing a couple of pitches near Daniel Murphy's shoes...it was a whole lot of nothing.

Fast foward to the seventh inning with Hansel Robles on the mound. Robles has been doing a great job in some crucial situations. But he did something that finally got Bowa and the rest of the Phillies dugout to erupt. Darin Ruf was standing in the batter's box, with his head down, adjusting his feet, taking his time, and Robles went into his windup and lobbed a pitch right down the middle of the plate before Ruf even picked up his head to face him - he quick-pitched him.

Quick pitching is nothing new. In fact, a number of pitchers have done it over the years, anything to gain an advantage. It is part of baseball. But in this day and age of wearing armor up at the plate, and Little League rules of no barreling into the catcher on a play at the plate, it is deemed dangerous to throw a pitch when a batter is standing in the batter's box and not looking.

Bowa went into his usual tirade and began jawing at Robles immediately, as did the rest of the Phillies contingency. And then the benches began to empty and players from both sides were on the field. Robles seemed genuinely confused as to why there was such a ruckus over his attempt to surprise Ruf. Heck, Bartolo Colon has been quick pitching throughout the course of the season. But in this case, Ruf wasn't looking. Bowa kept pointing at his head while yelling at Robles. And Bowa had a point...what if Robles had hit Ruf in the head?

I am just wondering what Don Drysdale would have done. Or Nolan Ryan. I wonder if they would have been concerned that the batter wasn't looking. The fact that the batter was standing in the box should signal that they are ready to go. Pitchers would traditionally get upset and uncork a wild one if they thought the on deck hitter was getting too close in order to catch a better view. But again, times have changed. Some of the traditional parts of the game have been eliminated, a lot of it for the safety of the players.

Robles may have made an innocent attempt to quick pitch, but doing it when the player wasn't looking may not have been the wisest thing to do when you are a rookie. Baseball players have great memories. Bowa was ejected for his outburst, but it will be interesting to see how the old baseball mind exacts the revenge.