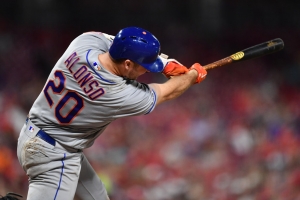 The Yankees have clinched the division title and have eclipsed the 100-win mark. Good for them. Congratulations. What they have done is amazing this season considering everything they have had to endure. They have survived serious, long-term injuries to key personnel. And regardless of who went down, there was someone to step in.

General Manager Brian Cashman has really done a fantastic job of keeping the team’s resources at maximum capacity, making some great moves to acquire players who played vital roles and made an impact. And with a mere 10 days to go in this season, you have to look at the Mets and wonder why this team couldn’t do the same.

Going into the last 10 games, the last seven of them at home, the Mets still have a chance to capture a wild card berth. They are not out of it. Not mathematically. But common sense dictates that the Mets can’t complete the comeback from an absolutely dreadful first half of the season and finish it off with a playoff spot of their own. And why do I think that? Because for one thing, the very asset that the Mets have that the Yankees DON’T have, is a starting pitching staff, and that staff has been good, sometimes great, but for the most part, inconsistent. And when you dig yourself the kind of hole the Mets dug themselves the first half of the season, you leave yourself no room for error.

Even when the starters have been “great” the team has found a way to lose. Because once the game is handed over to the bullpen, I don’t know of one person that doesn’t have the feeling, “Uh…here we go again!” Because the odds are that the bullpen…whoever that poor soul may be that is brought in…will ultimately do something to blow the game.

Seth Lugo, who wants nothing to do with being a reliever, has done an unbelievable job this entire season. He has been pitching with an injury which makes it even more impressive. However, after the obvious overuse that has been necessitated by the embarrassing performances of Edwin Diaz and Jeurys Familia, I am wondering what will become of Lugo after this season, and if he will bounce back and be effective again in the future. We all know how relievers are – inconsistent, up and down, etc. Justin Wilson has also done a fine job since returning from injury, but he is another one that can’t pitch that often and has been showing signs of overuse.

It will be interesting to see if the Mets can somehow get past the Cubs, Brewers, and/or Nationals. The Cubs are suffering from the injury bug and could easily fade. The Brewers are scalding hot and are doing it without MVP candidate Christian Yelich, who is out for the remainder of the year. And the Nationals, well, the Nationals appear to have righted themselves after their own awful start to the season.

Do the Mets have that one final push in them to grab a playoff spot? They have at least been playing meaningful games down the stretch, something nobody believed would happen at the All Star break. And if they do make it to the wild card game, will they even have enough in them to get past that game? Let’s not get ahead of ourselves. Hopefully we have more to look forward to than just Pete Alonso hitting No. 50…and beyond.

Extra Bases: Honestly, I would love to see the Nationals get in the playoffs just to see them do it without Bryce Harper. I remember Ralph Kiner telling the story about how, after leading the league in home runs, he went to management and asked for a raise. He was told, “We finished last. We could have done that without you.” Harper is a talent. But he has never been able to carry the team. Without him, other members of the team have flourished, especially young outfielders Juan Soto and Victor Robles. And Anthony Rendon, always one of my favorites, has had a monster year, certainly a better year than Harper who is now playing in a band box. I truly believe that the Nats are a better team without Harper. Addition by subtraction?

Congratulations to the Minnesota Twins on their season. They are currently in first place and could very well win 100 games this season should they win their last 6 of 9 games. It appeared that the Twins might fade after a strong start, but they have rallied and look like they will win the division title.  They are leading the majors with 293 home runs, sure to top 300 for the season. Remarkably the Twins are the first team to have five players slug 30 or more home runs. I remember when the Dodgers were the first team to have four players hit 30 in the same season – Steve Garvey, Ron Cey, Dusty Baker, Reggie Smith – during the 1977 season. The Twins have hit over 100 – ONE HUNDRED – more home runs than the Dodgers hit in that season. The Dodgers hit a total of 191 home runs that season, the Red Sox led the league with 213. To put it in perspective, the 1982 Brewers – Harvey’s Wallbangers – hit a grand total of 216 home runs including three with 30 and one with 29. This season, 22 of the 30 major league teams have hit at least 200 home runs. Not sure if it diminishes what the Twins have accomplished this year, or makes what the Dodgers did in 1977 even more impressive.