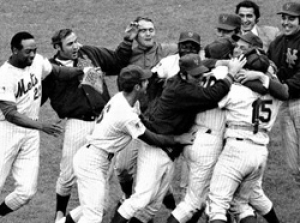 Fifty years ago today is when it happened. Movies have immortalized it. George Burns talked about it as one of his miracles in “Oh, God!” Dennis Quaid communicates with his son by talking about the seemingly miraculous occurrences during the ’69 World Series in “Frequency.” Cleon Jones going to one knee is shown multiple times in “Men in Black 3.” The sitcom “Everybody Loves Raymond” had a number of “69 Mets as guests on an episode when Tug McGraw, in typical “Tug McGraw” fashion tells Ray Romano “Take a hike Barone!”

I am old enough to remember when the Mets were bad. Not because of the Wilpons’ ownership, because they didn’t own the team back then. One Mrs. Joan Payson did. She, along with her lawyer William Shea, helped bring National League baseball back to New York five years after the Brooklyn Dodgers became the Los Angeles Dodgers and the New York Giants became the San Francisco Giants. The Mets were bad because they were an expansion team filled with old superstars who were way past their respective primes, and young players who were simply not ready for prime time yet. Those were the days where the Mets lost and the fans not only didn’t fuss about it, they embraced the team. In fact, the more ridiculous the team looked on the field, the more lovable they became.

Slowly but surely the farm system began producing some good young talent. Especially pitchers. And then, with the luck of the draw, literally, the best thing that ever happened to the team turned the franchise from lovable losers into serious contenders. The Franchise, Tom Seaver, made everyone take the team seriously. And once Gil Hodges was brought in to manage the club, there was a no-nonsense attitude that swept across the team. Suddenly, instead of crazy mishaps, the game was played the right way, the way it was supposed to be played.

I remember so many things about the 1969 season. Games were not always on television. Believe it or not some games were only on radio. And I would sit at my desk in my bedroom, or lay on my bed, and listen to my transistor radio of every inning of every game I could when I wasn’t in school. There really were day games during the week. My grandparents had season tickets for every Sunday home game and I went to many games that season. In fact, I was at the championship series clincher against Atlanta when Nolan Ryan came on in relief of Gary Gentry and mowed down the Braves to send the Mets to the World Series.

It was a time when “launch angle” and “exit velocity” were probably a part of the Apollo moon program because they certainly were not a part of baseball. It was a time when you could send a handwritten letter to any player to “Shea Stadium, Flushing, New York 11368” and get a black and white autographed picture of that player back in the mail…for FREE. It was time when going to the stadium didn’t drain your bank account.

There was something very special about that 1969 season. Special enough that people identify with it for their own personal reasons. That season was so special that I remember every player that played that season and their uniform number(s) that they wore. The stats for the players for that year are emblazoned in my brain. Who doesn’t remember that Cleon hit .340? Who doesn’t remember that Tom Seaver went 25-7 and Jerry Koosman logged a 17-9 record?

One of my favorite websites to look at and ponder over is BaseballReference.com. You can find out everything about every team for every year. And I find it fascinating to review the stats from different teams during different seasons. What truly is remarkable is what the Mets did during that 1969 season. Mets pitchers threw 51…that’s FIFTY ONE…complete games led by Seaver with 18 and Koosman with 16. Even McGraw…relief pitcher Tug McGraw…pitched a complete game. Mets hitters struck out 1,089 times, non-pitchers 875 times. The only hitter to strike out more than 100 times was Tommie Agee who whiffed 137 times. Ron Swoboda was close with 90 k’s. The rest of the lineup drew almost at many walks as they struck out, some with more walks than strikeouts.  Just think about that when you look at what the game has become today.

It’s a true shame that so much time has passed, and so many members of that special team have passed away. Fifty years is a long time. But not many events are remembered quite like that miracle season of 1969.