Frustration must be running rampant with the Mets...especially in the last 24 hours. The Mets started the series off against the Marlins with a huge distraction. The "Matt Harvey innings limit saga" suddenly became an issue just when the team is trying to sort things out with their starting rotation, trying to keep everyone fresh, and ensuring that everyone makes it to the post season healthy. Then they go ahead and lose a heart-breaker in 11 innings after the team fought back twice from deficits...the last time with two outs and nobody on in the ninth inning. The lead was blown again by the middle relief corps and the game was lost in the 11th...again by a reliever whose name is not Clippard or Familia. So it is no wonder that the old man, Bartolo Colon, would want to do it all by himself. 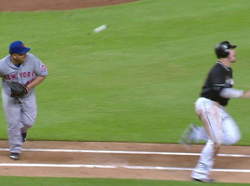 Colon won his 13th game of the season, which leads the Mets, after throwing a complete game shutout, scattering nine hits and walking none. He also made a nice fielding play on a nubber up the first base line, flipping the ball behind his back to Eric Campbell at first base. The guy is just going out there game after game and having fun. Thankfully he got some early support, courtesy of home runs by Travis d'Arnaud, Wilmer Flores, and Juan Lagares, and he was able to cruise through nine innings making it look relatively easy.

It looked like Colon was done for just a few starts ago. However, he changed his routine a bit, throwing a bullpen session in between starts, and it has translated into 25 consecutive scoreless innings. He is making a case for remaining in the starting rotation for the post season, especially since there seems to be this ongoing discussion regarding Harvey and his innings, Noah Syndergaard and his hypothetical innings limit, Jonathan Niese's recent ineffectiveness, and the appearance of some possible fatigue setting in with Jacob deGrom. And Steven Matz's effectiveness is a huge unknown right now.

If the Mets didn't have enough to worry about with the pitching staff and getting that situation in order, they now have Michael Cuddyer, who was finally getting hot, on the shelf indefinitely; Daniel Murphy out with an injury; and Lucas Duda still not able to swing a bat. It seems like the team just can't get everyone healthy at the same time.

So even though Terry Collins put a starting lineup out there that included Campbell and Eric Young, Jr., both of whom are hitting below the Mendoza line, they still managed to pull out a victory. And mainly because Colon continues to take the mound every fifth day and treat every game like it's a Sunday slo-pitch softball game. He lays the ball right in there and says, "Hit me." He goes up to the plate and just tomahawks the ball. And he flips the ball behind his back to nail a runner at first base. The guy is clearly having fun. And he, for one, is clearly not affected by any of those other situations that could very well rattle a less seasoned and fun-loving veteran.