Baseball The Way It Ought To Be?

The very thought of the Mets playing baseball well into October in 2015 is exciting. But if the series against the Yankees is indicative of what post-season baseball will be like, well, it will be brutal. Watching the Mets against the Yankees was like watching a Little League series. The Yankees are NOT a good team and the Mets...they were just bad.

The Mets are in the stretch run and it was the first important series against another team fighting for a post-season position. They got a taste of what the post-season atmosphere would be like in their own ballpark. And it was a bit disappointing. 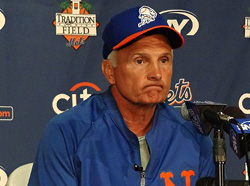 Steven Matz pitched a beautiful game and the Mets hit three home runs to support him in Game 1. But it became a nail biter when Familia ran into a jam in the ninth inning. Then Noah Syndergaard made two mistakes which cost him and the Mets bats went quiet again in Game 2. Game 3 should have been a "gimme" as Matt Harvey was matched up against CC Sabathia who is having a horrible time. And it appeared that it would work out perfectly. David Wright gave the Mets an early lead and Harvey was masterful for five overpowering innings.

But then Terry Collins removed Harvey after the fifth inning and the Yankees had their way with the Mets middle relief corps and Sabathia all of a sudden turned the clock back 10 years and looked like his old self.

I understand that things are very different than they were 40 years ago when the Mets young pitchers threw 51 complete games in a season. But these innings limits and pitch limits are getting to be ridiculous. In a day and age where the athletes are bigger, stronger, and more physically developed, the pitchers are more pampered and coddled than ever. And with all of that pampering and coddling, there are more injuries than there ever were.

The fact that Matt Harvey was removed after five masterful innings against the Yankees, in a game that was extremely important to both teams, was strategically...uh...uh...well...just stupid. But then, why in the world would the Mets field a lineup that was not their best lineup? Why were four of the Mets best hitters - Daniel Murphy, Curtis Granderson, Michael Conforto, Wilmer Flores - on the bench? Why was Ruben Tejada the team's leadoff batter?

And some of the silly mistakes still seem to happy...physical mistakes and mental mistakes. It just can't happen if you want to be successful in the post-season.

Were those three games really baseball the way it ought to be? Well...maybe for Yankees fans.