Mets Engage Rockies in a Slugfest

After sweeping the Rockies in four games at CitiField just a week ago, the Mets met with the Rockies on their own turf to begin a three-game series at Coors Field. And the Mets showed that they could keep up with the Rockies brand of "Coors Field baseball" better known as good old fashioned Home Run Derby. Well, at least Yoenis Cespedes did. Cespedes had a career night hitting three home runs, including a second inning grand slam, going five for six with seven RBI, five runs scored, and added a stolen base. The game actually resembled a slow pitch softball game as the teams pounded away at each other with the Mets eventually winning 14-9 after blowing an early 7-1 lead. 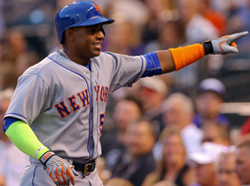 Bartolo Colon, after pitching brilliantly in his last start, just didn't have it, getting knocked out in the fourth inning. Although the Rockies tied the score at 8-8, Cespedes got the Mets back on top with his third homer, a two-run blast. Travis d'Arnaud chipped in with a home run and Michael Confornto hit a bomb in his last game before he gets sent down to Triple A for 10 days to make room for an extra relief pitcher for the next two games.

Sean Gilmartin came on for Colon and pitched 2 1/3 innings only yielding one run and got the win. Hansel Robles pitched an inning and also gave up one run, but Tyler Clippard pitched a scoreless eighth inning and Jeurys Familia pitched a perfect ninth inning. The way the game was going, the fact that Gilmartin only gave up a run in his two plus innings of work, and Robles allowed one run, was a blessing. The Rockies pitchers just kept tacking on to their league worst ERA. You almost have to feel bad for pitchers who go out there knowing that they are going to get blasted.

I wonder if Matt Harvey is really all that disappointed that he is skipping his scheduled start on Sunday. Yeah, the time is right to worry about that innings limit. Logan Verrett will be the sacrificial lamb in his place, after Jonathon Niese takes his turn in Game 2 of the series.