Yogi Berra...the iconic Yankee...and the lovable Met...passed away at the ripe old age of 90. Not many people can be considered folklore, but you would think anyone with the name Yogi could. But he was so much more than someone with a funny sounding nickname. He was a great player, a knowledgeable coach, a caring mentor, a compassionate human being, and a true gentleman in every sense of the word.

He was a family man, his wife and children always came first. He served his country in the U.S. Navy, and even participated in one of the biggest battles in the history of this country during WWII. He was a loyal and much-loved teammate. He was Derek Jeter before there was a Derek Jeter. 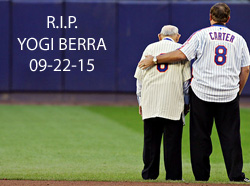 The fact that he is probably most well-known for all of the silly things that allegedly came out of his mouth is actually an injustice. While it makes for great stories, Yogi was actually one of the most intelligent men to ever don the uniform. In a day and age where players HAD to work in the off-seasons and often struggled to make a dime after their playing days were over, Yogi was an alert and sensible business man who flourished after his playing days were well over.

The Yankees lost another legend. The Mets lost another memorable character. No. 8 joins another No. 8 as Yogi joins Gary Carter on another playing field. It IS now over Yogi. RIP.