It's playoff time and a lot of memories come flooding back. It's been nine years since the Mets have been here...and the only thing people can remember is the image of Carlos Beltran standing in the batter's box taking strike three from a young upstart named Adam Wainwright. And that's really unfair to Beltran...because there are so many other memories of the October events that lead to a World Series appearance. 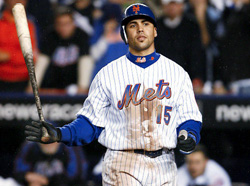 My first memory is Game Three of the 1969 National League Championship Series. Because I was there. My grandparents had season tickets and we had great seats right behind the first base dugout. Gary Gentry was on the mound for the Mets and Hank Aaron took him deep early to put the Braves on top. But Nolan Ryan came in and shut down the Atlanta attack and the Mets won the pennant. And the fans mobbed the field...and tore apart the Shea Stadium grass. I wanted to join in...but I was only nine years old and my grandfather was afraid I would be trampled. After all, I was not always as big as I am now. But lo and behold, on the train heading home, a gentleman was cradling a huge piece of grass in his arms. My grandfather was not shy and asked if his grandson could have a piece of it. And the man graciously obliged and gave me a hunk of the Shea infield. That grass was planted in the front yard of my house and was carefully manicured for years.

Four years later I was also at Game Three of the 1973 NL Championship Series. That was another infamous game...the game that featured the fight between Pete Rose and Buddy Harrelson. The Shea Stadium crowd erupted and continued to be uncontrollable long after the two teams retreated to their respective dugouts and bullpens. But when Rose went out to his post in left field, the fans were excessively unruly and were throwing anything and everything down onto field, showering Rose with every piece of debris imaginable. An announcement was made that if the fans did not cease, the game would be forfeited. It was then that Tom Seaver, Willie Mays, Cleon Jones, and Rusty Staub walked out to left field to make a plea to the fans to stop throwing things onto the field. I can remember Staub stopping just past the mound, running back to the dugout, and coming back out with a batting helmet on his head. I guess he felt..."just in case." And, of course, the Mets won and went on to their second Fall Classic.

Oh yeah...1986. That was the year the Mets dominated the National League. But they ran into their old nemesis, the Houston Astros, in the playoffs. And the two teams mounted a competition that was more grueling and exciting than any World Series could be. In fact, the 16-inning, four-plus hour Game 6 won by the Mets is one of the classic games of all time. It was a great series and the Mets won, but it would sort of make the World Series anti-climactic. Well...almost. But if it weren't for the Game 6 Mookie Wilson-Bill Buckner-Mets Comeback...people would still be talking about that series against the Astros and probably forget that the Red Sox were even involved at all.

Then 1988...why does David Cone come to mind? Oh...because he decided to do what I am doing now...write...and he pissed off the Dodgers. He did not follow one of the oldest rules in sports. Do NOT give the opposing team anything to post on the clubhouse wall. Well...Cone provided the fodder and then the Mets could not back up the swagger thanks to the gimpy Kirk Gibson and one of the most famous home runs in post season history. And the Mets lost their first NL Championship series.

The Mets next trip to the playoffs was 1999. The team was probably one of the best offensive squads in their history powered by Mike Piazza, Robin Ventura, Jon Olerud, and Edgardo Alfonzo. They even had Rickey Henderson leading off and playing left field. But the pitching was average at best, even though it included Al Leiter and, believe it or not, Orel Hershiser. But the members of the starting rotation all had ERA's well over 4.00. And it didn't help that they ran into the Hall of Fame trio of Tom Glavine, Greg Maddux, and John Smoltz as the Braves sent the Mets home in six games.

But they got back to the playoffs the next year with virtually the same cast. And, unfortunately, the playoff were a blur. They beat the Giants in the Division Series three game to one and then did away with the Cardinals four games to one in the NL Championship Series. The fact that they met up with the Yankees for their first appearance in a true Subway Series is what makes the memory of how they got there less spectacular. And yes, they lost the series to the Yankees, but hey, a Subway Series...that's all that matters, right?

So that brings us to 2006...the last time the Mets were participants in the post season. The Mets were a team that was expected to win with a nice mixture of veterans and young homegrown stars named David Wright and Jose Reyes. They won 97 regular season games and they were an exciting team. Carlos Beltran had one of the best seasons of his career. He hit .275 with 38 doubles, 41 home runs, 116 RBI, and walked 95 times, and he proved to be one of the best defensive centerfielders in the game. If it weren't for the season that Belran had, the Mets would not have won 97 games and may not have even gotten to the playoffs. Why am I putting that out there? Because, unfortunately, the only memory people have of the 2006 post season is Mr. Beltran taking that third strike. It is a grave injustice to a man who played the game hard, played hurt, gave his all, and was probably one of the best all around players to ever don the Mets uniform. He was a great Met.

The Mets have returned to the post season. It's time, finally, to forgive Carlos Beltran. I know that at least one person, Mr. Bill Buckner, would agree with me.