Well...it was better than advertised. The National League's reigning Cy Young Award Winner and MVP against the reigning Rookie of the Year. Clayton Kershaw, actually the winner of not one, not two, but three Cy Young Awards, took the mound with a purpose...trying to finally muster the same success in the post season as he has come to enjoy in the regular season. And Jacob deGrom, the phenom who was not on anyone's radar two years ago, climbed the Dodger Stadium mound also with a purpose...to show he was just as deserving to share the spotlight with Kershaw.

The two would put on quite a show...going head to head...strikeout for strikeout...each giving up a hit here and there...but leaving the opposing hitters shaking their heads while heading back to their respective dugouts. Daniel Murphy's fourth inning home run gave the Mets the lead and it would prove all that the Mets would need. Because as good as Kershaw was, deGrom proved to be that much better...finishing with 13 strikeouts over seven innings. He yielded five hits, two that were actually misplayed fly balls by Michael Cuddyer in left field. Kershaw struck out 11 Mets, but he tired in the seventh inning and left the game after walking the bases loaded with two outs. 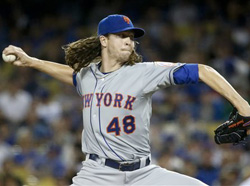 David Wright would put the finishing touches on Kershaw's night by greeting reliever Pedro Baez and delivering a 100-MPH fastball into centerfield to drive in two insurance runs...as the Mets took Game 1 by a score of 3-1.

Watching deGrom and Kershaw lock horns was really a classic. Everyone will tell you that pitching is what wins in a short series. Great pitching has always been able to stymie even the best of hitting attacks. The Mets have proven that in the past. Just look at 1969 when they beat the hard-hitting Atlanta Braves and the powerful Baltimore Orioles. The young staff of Tom Seaver, Jerry Koosman, Gary Gentry, and Nolan Ryan shut those hitting machines down. In 1986, Dwight Gooden, Ron Darling, Sid Fernandez, and Bobby Ojeda did the same thing to the Houston Astros and the Boston Red Sox.

The fact is, even with the presence of the electric Yoenis Cespedes, the return of David Wright, the power of Lucas Duda, and the steady hitting of Curtis Granderson this Mets team is built for pitching. The power arms of deGrom, Matt Harvey, Noah Syndergaard, and Steven Matz are overwhelming...well...apparently to opposing hitters. And don't forget that Zack Wheeler, who might even be the best of them all, is not even around for another 8-9 months. A series that features pitching duels actually plays right into the Mets strength.

And watching the stud pitchers is a lot of fun. And if they go up against a Kershaw or a Zack Greinke, then it makes you forget that the Mets hitters continue to strike out at an outrageous pace. A clutch hit here or there, and perhaps that is all these young guns need.

deGrom did his job in Game 1. Now let's see what Thor can do for an encore in Game 2.