It happened in 1973...I was there. The Mets pitching staff had halted the attack of the Big Red Machine and the Reds had their backs against the wall in the National League Championship Series. Something had to give. Someone had to light a fire and get the Reds back in the series. That's when Pete Rose went in hard...VERY hard...into the Mets beloved shortstop Bud Harrelson to break up a double play. It did not break up the double play but it DID incite a riot at Shea Stadium.

Even after the players returned to their respective dugouts and bullpens, the raucous fans at Shea would not let up. When Rose went to take his position in left field, he was showered with all kinds of debris. It was actually a horrible display. The public address announcer made an announcement telling the fans that the game would be forfeited if they didn't stop. Finally, Tom Seaver, Cleon Jones, Willie Mays, and Rusty Staub - acting as goodwill ambassadors - walked out to left field and appealed to the fans to halt. The game resumed, the Mets won, but not before Rose claimed the title for the most hated athlete in New York...long before he became the most despised person in baseball period.

And now another has claimed the title that Rose so eloquently carried for so many years...and under some somewhat similar circumstances. 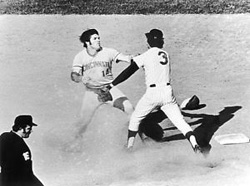 The Mets young guns had the Dodgers backs against the wall in Game 2. After Jacob deGrom outdueled Clayton Kershaw in Game 1, Noah Syndergaard took his turn and was doing the same to Zack Greinke in Game 2. Similar story. Something had to give. Someone had to light a fire and get the Dodgers back in the series. That's when Chase Utley - a Mets nemesis for many years - went in hard...VERY hard...into the Mets shortstop Ruben Tejada. He broke up the double play, allowing the game-tying run to score, and also broke Tejada's leg at the same time.

Hard slide? Yes. Take out slide? Yes. I love a good, hard-nosed play more than anyone. I was a catcher who played when you could barrel into anyone blocking the plate. And I was barreled into plenty of times. But what Utley did was dirty pool. He went in hard, but he went in late...he didn't even start his slide until he was even with the bag. And he never even touched the bag. When you are trying to "take someone out" you have to at least make an effort to be in the vicinity of the bag. What he did looked more like a chop block that is even outlawed in the NFL.

The ruling to put Utley back on second base was absurd, and is a perfect example of how the replay and challenge process is, at the very least, not being used properly or effectively. There HAS to be a way to use it that doesn't ruin the game and its integrity. But that's a whole other discussion.

For now, the Mets have lost Tejada, and that's not fair. And, apparently, the League thought the same because Utley will be gone for Games 3 and 4. So there is SOME justice. But, in reality, the Mets lost their starting shortstop for the rest of the post season and the Dodgers lost one of their bench players for a mere two games. Justice?

Utley has taken over the role of the most hated opponent by Mets fans. And rightfully so. It will be interesting to see what happens the next time he digs in against any member of the Mets starting staff...a staff that throws the most pitches over 95 MPH on average in the league. Could be a little chin music heading his way paaaarrretty quickly, wouldn't ya say? Maybe Barry Bonds could lend him some of that armor HE used to wear. Mr. Utley may just need it....for his own sake.