Harvey Comes Up Ace(s) in Game 1

After all of the rhetoric about limitations and late arrivals, Matt Harvey made his pitch to be the ace of the staff as he was on top of his game and had great command to lead the Mets to a Game 1 victory over the Cubs. Harvey was very impressive...he had all of his pitches working...and he pitched into the eighth inning throwing only 97 pitches before yielding to Jeurys Familia with two outs.

Daniel Murphy continued his red-hot post season by hitting another home run to give the Mets the early lead in the first inning off southpaw Jon Lester. Murphy is NOT a home run hitter...he hit a career-high 14 during the regular season. But what makes his post-season run so impressive is WHO he has hit the home runs off of - Clayton Kershaw (2), Zack Greinke, and Lester. He is just "locked in." And he made a stellar play in the field to end the game. Murphy is doing what Carlos Beltran did in the 2004 season when he was "on loan" to Houston for the post season. It earned Beltran a huge free agent contract. 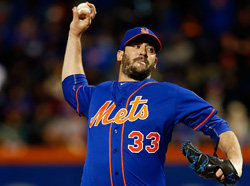 After Juan Lagares misplayed a tough wind-aided fly ball that led to the Cubs first run against Harvey, he helped manufacture the go-ahead run with a heads up steal of third base which enabled him to score on Curtis Granderson's sacrifice fly. On the other hand, Yoenis Cespedes did NOT misplay a ball, but rather grabbed a single through the hole and gunned down a runner trying to score from second base to save a run. Seems like the umpteenth time he has done that. Travis d'Arnaud snapped out of his slump with a BOMB into the apple in centerfield.

It is becoming more and more apparent that Terry Collins and his staff have NO confidence in anyone in the Mets bullpen with the exception of Familia. They chose not to go to Tyler Clippard in the eighth with two outs. Instead, they went to Familia for a four-out save after he notched a six-out save in the finale in Los Angeles. And they again had starter Bartolo Colon warming up in the seventh inning rather than the usual members of the pen. So it looks like it will be the six starters and Familia the rest of the way. And who ever is not starting on that particular day, and it is their day to throw, they will be available out of the pen.

The Mets seem to have the advantage over the Cubs. Everyone talks about the power of this young Cubs team. And you have to respect that power. But, in reality, the Mets actually out-homered the Cubs this year 177-171. And I keep talking about how the Mets strike out at an astounding rate...and they do. They struck out nearly 1,300 times during the regular season. Well...the Cubs struck out over 1,500 times during the season. THAT is a TRULY astounding rate. The fact that the Mets four starters are all power pitchers with high strikeout ratios and the Cubs hitters strikeout at such a ridiculously high rate should give a huge advantage to the Mets.

And with the 4-1 win in Game 1, it IS advantage Mets with Noah Syndergaard going in Game 2.