Oh geez...he did it again! Daniel Murphy just has to be feeling it. Anyone who has ever played the game of baseball knows what it is to feel "locked in." And he is definitely locked in during this post season as he once again hit a home run, this time a three-run first inning bomb off Cubs ace Jake Arrieta. What is so impressive about Murphy's run is WHO his victims are - Clayton Kershaw (2), Zack Greinke, Jon Lester, and now Arrieta, who along with Greinke are the leading candidates to win this year's Cy Young Award.

And after Matt Harvey dominated the Cubs in Game 1, Noah Syndergaard duplicated the feat and just overpowered Chicago in Game 2. Another brilliant game by one of the Mets young guns...and Jacob deGrom is ready to take his turn in Game 3 on Tuesday in Chicago. 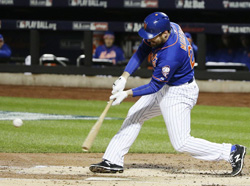 Curtis Granderson, who just seems to be in the middle of everything, proved to be a spark that would ignite the two Mets rallies. He stole two bases that led to a run on an RBI single by Yoenis Cespedes and then stole a run by leaping to steal a home run off the bat of Chris Coghlan.

Granderson and Murphy are both old-fashioned, hard-nosed players and they are both out there just having fun and putting it all out there. Granderson is happy he made the right decision to sign on with the Mets before last season to be a part of all of this. And Murphy is happy that he is STILL around to be a part of all of this before he makes a decision to parlay his Carlos Beltran-like post season into a Carlos Beltran-like free agent contract.

It was great to see Jonathan Niese come in and get the one out against Anthony Rizzo in the sixth inning. And then, finally, members of the bullpen - other than Jeurys Familia - did their jobs. Addison Reed put up a zero in the seventh and Tyler Clippard did the same in the eighth before Familia wrapped it up in the ninth. This a good sign since it appeared that Terry Collins had little faith in the pen before Game 2.

The Mets have gotten past the Cubs best two starters in Arietta and Lester with two wins...which nobody outside of NYC could have ever expected. And now deGrom will be up next with Steven Matz lurking for his turn in Game 4. So the Mets head to the windy city with a huge advantage...just two games away from the Fall Classic.