The Mets put the final nail in the coffin of the Chicago Cubs, completing the sweep and sending them into the 2015 World Series. And they simply repeated the same process they utilized each and every game before - one of their young starters (this time it was Steven Matz) overmatched the Cubs hitters, Jeurys Familia put the finishing touches on in the ninth, and I am getting tired (not really) of saying this...Daniel Murphy hit a home run.

The Mets starters simply did not give the Cubs a chance to breathe. The Chicago hitters were able to put a chink in the armor here and there, but the Cubs never led at any time during the four game series. The Mets staff just completely overpowered the power hitters of the Chicago lineup. 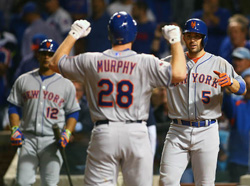 And what can you say about Daniel Murphy? He hit a home run in each of the four games in the series and in six consecutive post season games dating back to the Dodgers series...something nobody has ever done in the history of the game. He just caught fire and has not cooled off. He had a remarkable series hitting, on the base paths, and in the field. And justifiably so, he was awarded the NLCS MVP.

You have to be happy for Murphy...with all of the talk about him as a "liabiity"...he has now emblazoned his lore as a folk hero in Mets history. You have to feel good for David Wright...it was just a couple of months ago that the experts said his career was over. And his faith in the organization and decision to stay on board...as well as all of his hard physical work to come back from a serious back issue...was rewarded with a trip to the World Series. And Wilmer Flores...the young man who thought he was a goner at the trade deadline...has shown he IS a capable shortstop and a reliable hitter...and IS still around to be in the World Series.