For all of the Mets historians out there...does anyone recall how the 1969 World Series got underway? Bottom of the first inning? Tom Seaver...The Franchise...pitching? Does anyone remember the name "Don Buford?" Any of this remind anyone of anything?

As I recall, Buford was the Orioles leadoff batter and he lofted a Seaver pitch deep to rightfield. Ron Swoboda, not the most graceful of outfielders, backpedalled...backpedalled...and backpedalled...right into the rightfield fence. And the ball just managed to clear the fence for a leadoff home run which set the stage for a Game 1 Orioles win. The truth is, had Swoboda run straight back to the fence, braced himself, and just jumped ever so slightly, he could have caught the ball. Not the easiest play, but one a good rightfielder would have made. And hey, Swoboda more than made up for that in Game 4 with his famous diving catch. 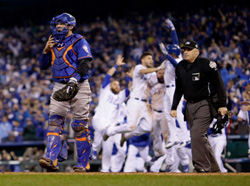 Fast forward to 2015. Bottom of the first inning. Matt Harvey...The Dark Knight...pitching. Alcides Escobar lofts a fly ball to left centerfield. Yoenis Cespedes misplays the ball...doesn't catch it...then kicks it...and it turns into what is ruled an inside-the-park home run. NO WAY was it an inside-the-parker. A double and a two-base error...maybe. A triple and an error...perhaps. But that ball...especially given Cespedes' prowess for playing centerfield...should have been caught. And for anyone to say that Juan Lagares WOULD have caught the ball...is not really accurate. Because while Lagares won a gold glove last year and is definitely a wonderful centerfielder, he has been playing injured and is but a shell of himself while Cespedes has looked All-World out there.

The point is...Game 1 of 2015 began with a ball misplayed into a home run just like the Buford shot in 1969. And much like Swoboda came back to do something special, it is more than likely Cespedes will do the same.

The coverage on Fox is so disappointing. Of course the power outage could not have been more ridiculous...showing how unprepared the network was. And what is so absurd about it is that the only reason it actually affected the game was because the managers were concerned that they would not have access to the instant replay in the event that they would need to challenge a call on the field. How the game has changed since the last time these two teams won this thing (Royals 1985, Mets 1986).

And watching the Fox broadcasts just makes you appreciate the broadcast team of Gary Cohen, Keith Hernandez, and Ron Darling. And, of course, Howie Rose on the radio side. Listening to Joe Buck, Harold Reynolds, and Tom Verducci is unpleasant. I respect Buck as a broadcaster but if he is not teamed up with a good analyst his weaknesses are exposed. And while Reynolds is a good studio analyst, his in-game analysis is horrible and annoying. And why is Verducci in the booth? With all of the former players available, why is a news columnist in there? It is a total misfit.

What happened to the days of a neutral broacaster for the play-by-play with a member of each team's broadcast team? Wouldn't that make a lot more sense? It would also bring a lot more to the broadcast.

And why does the network need so many others to sit at a table and add their two cents? There are just too many people involved who just don't seem to fit. It is just (as my mother would call it) a mishmosh.