Mets Bullpen is on Shaky Ground

The Mets are sitting atop the Eastern Division of the National League yet they are far from running away with the division title. In fact, the thought of meeting up with any of the three teams in the Central Division - Cardinals, Pirates, Cubs - is downright scary. The Mets are doing a pretty good job of beating up on the second division teams...but they are struggling against teams with winning records...as evidenced by their sweep of the Rockies followed up, in turn, by getting swept themselves by the Pirates at CitiField. The split with the Orioles in Baltimore not only showcased the Mets strength, it also showcased their weaknesses. 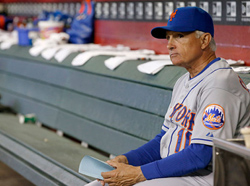 The members of the starting staff, even when they are not exactly on top of their game on any particular day, they still manage to keep the team in the game. However, two glaring issues remain - 1) the Mets offense still lacks the punch to go toe to toe with good offensive teams no matter how well the Mets starter pitches and 2) the Mets bullpen is very unreliable at best, and more often than not, shaky.

GM Sandy Alderson has taken it on the chin throughout his tenure for not doing a good job of bringing in pitchers to fill the spots in the bullpen. Understandably, it is very hard to pick guys up to be middle innings guys because the very nature of that position is very unstable and things can change from not only year to year, but from game to game. It appeared that the Mets bullpen would be stocked this season and just might finally be a strength. But missing from the roster are lefties Josh Edgin and Jerry Blevins, and righthanders Vic Black, Rafael Montero, and..oh yeah...Jenrry Mejia. If the first four were healthy and the last guy wasn't such a dumbass, Terry Collins wouldn't be sitting in the dugout squirming with every pitch in the later innings.

It is obvious that Bobby Parnell, after his performances in the Pirates series that cost the Mets two brutal losses, was not ready to return from Tommy John surgery. The loss of Mejia caused the team to rush Parnell and it's clear that it was the wrong move, one made out of desperation.

It's difficult to say anything negative about Jeurys Familia because he was lights out the first half of the year. But since the All Star break it is obvious he is not automatic any longer. Tyler Clippard was a great pickup by Alderson, but he can't be counted on every night. Unfortunately the Mets of 2015 can't match the amazing statistic of the 1969 pitching staff which registered 51 - that's fifty one - complete games. In this day of pitch counts and recuperaton from Tommy John surgeries, you can't rest your hopes on great starting pitching to throw complete games...it just doesn't happen and it won't happen.

The report is that Matt Harvey will skip a start to preserve some of his innings and there is talk that Noah Syndergaard may head to the bullpen soon to do the same with Steven Matz taking his place in the rotation as soon as he is ready to return from his injury. The thought of Syndergaard coming out of the rotation is not appetizing, but perhaps he could, for the short term, provide some stability in the bullpen the way Adam Wainright did for the Cardinals when he first came up. Regardless, the bullpen needs to be stabilized and become more reliable if the Mets are to contend the rest of the way and have any hopes in the post season.