Mets Strength Has Been Greatly Weakened

My mother always tried to warn me, "Don't count your chickens before your eggs are hatched." It's a good rule to live by, especially before the start of the baseball season. A 162-game schedule makes for a long season and a lot can happen. A season can turn on a dime. Things can go bad very quickly.

So when everyone was so quick to label the Mets starting rotation as the best staff ever assembled, you just had to wonder if it was a bit premature. Well they may just be the best collection of talent. But there certainly seems like there is something to be concerned about, especially for those who remember the group from a prior era that carried the tag "Generation K." The hype is great for marketing, but sometimes it can land you with egg on your face. 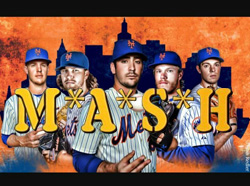 Noah Syndergaard has been absolutely brilliant, pitching like a young Nolan Ryan. Thor is the only one of the Mets starters to NOT have surgery...yet. OK the "yet" is in there mainly because he underwent a "secret" MRI some weeks ago and now he is pitching with a bone spur and suddenly came up with a dead arm in his last start.

Steven Matz was the left handed side of brilliance. Other than his first start of the season which was a horror scene, he had been the reincarnation of Sandy Koufax. Until June, that is. He had to skip a start because of a pain in his arm, and that pain in his arm has turned out to be a bigger bone spur than Syndergaard has and is affecting his pitching and approach.

Jacob deGrom got a late start due to the birth and, later, health issue of his child. His velocity is down but, for the most part, he has been able to get by with less than his stellar stuff and figure things out. His last outing proved that, as he narrowly missed a no-hitter versus the Phillies when he, himself, admitted he was struggling to find his command.

Poor Matt Harvey. Unlike deGrom, he couldn't seem to figure things out. He began every start like the Dark Knight but then somewhere, somehow, it would all go bad sometime before the sixth inning. You had to wonder what went amiss with this guy. And just when it appeared that he might have turned a corner, we find out that he has a serious issue that required season-ending surgery. There is a distinct possibility that, heaven forbid, maybe he just won't be the Dark Knight anymore? Only time will tell.

Bartolo Colon has been up and down yet has been pretty much more up than down. He has been walking an unusual amount of hitters thus far, well, unusual for Colon, that is. But Colon, old enough to be the father to the rest of the staff, has actually been the one steady member of the rotation. Even a direct hit to his thumb didn't deter him.

And what about the others? Logan Verrett has suddenly proven to be human after a great performance last year. He is NOT a sure thing. And the guy who is always waiting in the wings, Rafael Montero, he has SO much potential but every time he is given a chance he is brutal...so brutal that he was recently DEmoted to Double A.

Zack Wheeler was on target for a July return. It's now entering the second half of July and he isn't even close, having had a set-back in his rehab as he makes HIS way back from Tommy John. But why is everyone clamoring to trade this guy? He was always the one with the most potential. And with all of the question marks (whether overt or covert) regarding the health of the rotation, why in the world would you even consider trading a potential ace, especially with Harvey's future in question?

The bullpen has either been great or awful. On the great side, Jeurys Familia has had a few hiccups, but he has proven that he deserves to be considered among the elite closers. Addison Reed has done a tremendous job as the set-up man, but he has logged too many innings, too many tough innings, and it could begin to show very soon. Jerry Blevins has really turned it around after a disastrous season last year and has really had a great showing over the last couple of months as the lefty specialist.

What makes matter worse is that all of the innings logged by the pitchers on this staff are not "easy" innings, they are all stressful. The pressure is on as the hitting is not consistent and, more often than not, fails to produce adequate support. Tom Seaver, Jerry Koosman, and Jon Matlack could all testify to the effects of a consistent lack of run support and what it does to the arm and how you approach your game.

The irony of it all is that the strength of the team, and the organization, was, or was perceived to be, the Mets pitching. So go figure that, as the trade deadline approaches this year, management is on the lookout for a reliable pitcher to add for a possible pennant run rather than another Yoenis Cespedes.

It seemed like all the pieces were in place for not only a run at a second consecutive berth in the Fall Classic, but a dominance that has not been seen since 1986. But could it be that everyone was a bit quick on the trigger with regard to the NEXT Generation K?