So much for being the sacrificial lamb. Logan Verritt took Matt Harvey's turn in the rotation and turned in, well, a Matt Harvey-like performance. Verritt overcame some first inning jitters and provided just what the Mets needed by tossing eight innings of one-run ball. Yes...he only yielded a single run over eight innings at Coors Field and that came on a solo shot by Carlos Gonzalez. The Mets hitting cooled off a bit  - well they weren't going to score 14 runs every game - but they did score five runs, thanks in large part to Rockies starter David Hale uncorking back to back wild pitches to plate two runs. 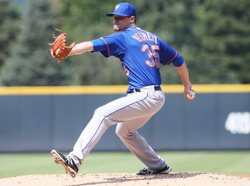 Verritt undoubtedly benefitted from his time spent at Triple A Las Vegas where pitchers are accustomed to sporting inflated ERAs. Bartolo Colon and Jonathan Niese have to wonder what the young righthander did to keep the Rockies hitters at bay...after they each got pounded in their starts.

Thanks to a second series sweep of the Rockies, the Mets are now 11 games over the .500 mark, matching their high water mark of the season, and they are five games ahead of the Nationals in the Eastern with 39 games left to play in the regular season.

The Mets head to Philadelphia to take on the last place Phillies for four games and then head home to CitiField for a three-game series against the last place Boston Red Sox. This is where the Mets need to make their move and put some distance between them and the Nationals. After getting cooled off by the Pirates, the Mets have won three in a row and four out of their last five, all on the road. The Phillies and Red Sox are ripe for the taking. But it is never easy for the Mets as they have had an inconsistent offense and an unreliable middle relief corps.