The beautiful thing about the game of baseball is that anything can happen on any given day or any given night. It was an unexpected and welcome surprise that, after Mets starters got shelled the first two games in Colorado, along comes Logan Verrett who throws a gem and makes everyone forget that it was supposed to be Matt Harvey out there. And then when you see that the Mets are waltzing into Philadelphia to take on the last place Phillies with Jacob deGrom on the mound, you would think, no, you would truly believe that the Mets would be focusing on the return of their captain David Wright and nothing else. 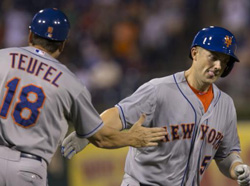 Instead, deGrom had the worst outing of his career and didn't get out of the third inning, yielding three home runs that led to seven runs. So many times deGrom has pitched beautifully, only to see games slip away when his teammates couldn't come through. This time, his teammates bailed him out as they decided to bring their Coors Field game east to play home run derby with the Phillies. Wright started it all in his first at bat by hitting a bomb into the second deck in leftfield as the Mets hit a franchise record eight dingers. Seven different players homered with Wilmer Flores hitting two.

It is beginning to feel like something special is happening. It wasn't too long ago that if the Mets were down 7-2 in the third inning, you wouldn't feel too bad about getting out of your seat and begin getting involved with something else. The hitting seems to be coming around in a big way. They say that winning breeds winning. And when players get hot, it quite often becomes contagious. But it seems like the pressure is no longer there...that nobody has to play the part of the savior. The team now has enough talent with a mixture of young, agressive upstarts and cool, seasoned veterans that could make things very exciting down the stretch and perhaps even into the post season.

For so long the team wasn't even fun to watch...except, of course, if one of the young studs was pitching. But even then it would be frustrating because you KNEW if they gave up just a single run it might not be a good result. But now, this is really getting interesting. And fun.