Mets Hitting Could Be a Mirage in the Mountains

The Mets have shown that even a dismal offense, one that ranks last in the National League, can suddenly come to life when visiting Denver. Given the performance of the team over the course of the season, rather than being a mile high in the Rockies, you would think they were quite a bit lower and in the desert because it most certainly has to be a mirage of some sort. If you are a homer, you always love to see your team trounce the opposition. But let's be honest, the Mets have NOT trounced the Rockies even though they have won back to back games by identical scores of 14-9. 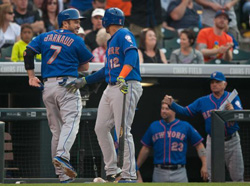 In reality, the Mets squeaked past the Rockies in each of those games and have to be thankful that the only two reliable bullpen members - Tyler Clippard and Jeurys Familia - were able to shut down the Colorado attack doing their respective jobs in the eighth and ninth innings. At Coors Field, coming into the game with a five-run lead should be a save situation instead of the customary three-run maximum differential.

It is great to see everyone join the Mets hit parade, and watch them go around the bases like it was nothing more than a carousel at a local carnival. But for anyone to get too excited about it would be unrealistic. Anybody who has played at Coors Field as a Rockie would tell you that. Just ask Michael Cuddyer. A good hitter in a hitter's haven in Minnesota and then a remarkable hitter in Colorado, only to suffer the same fate as so many others like Jason Bay, Bobby Bonilla, et. al., once they get to the Mets. But to say it is just about the make-up of the field, the altitude, the winds, the loud airplanes flying overhead, would be unjustified. I had to wrap my head around this somehow...so I went back to the well one more time and looked at the stats for the 1969 Mets and compared them to the 2015 version.

The late 1960's saw a huge dip in batting averages, although some perennial stars - many Hall of Famers - managed to maintain a level that produced big numbers. But again, it seemed like that was for those special players. Hitting .250 seemed to be average and if a player hit .240 it was not so much a catastrophe. Why? Let's take a look inside the numbers that most people don't look at.

In 1969, the Mets had but one player - one - that struck out more than 100 times. That player was Tommie Agee who led the team with 26 home runs and 76 RBI from the leadoff spot. He struck out a total of 137 times but that was in - get this - 565 at bats. He also walked 59 times and had an on base percentage of .342. Cleon Jones was neck and neck all year long with Pete Rose and Roberto Clemente for the batting title before settling in for third place with a .340 average. He had an on base percentage of .422 adding 64 walks to his 164 hits. And he only struck out 60 times. He walked more times than he struck out. I always loved Ed Kranepool as a kid, especially because of his history with the Mets. But in researching this, I came to appreciate him even more. I knew he only had a .238 average in 1969 and ended up sharing first base duties with Donn Clendenon down the stretch. But he did hit 11 home runs and drove in 49 while only striking out 32 times in 353 at bats. And he walked 37 times, five more times than he struck out. Art Shamsky, sharing right field with Ron Swoboda, hit .300 for the season, with 14 homers and 47 RBI, and he only struck out 32 times in 303 at bats while getting 36 free passes.

The bottom line is that the Mets offense can be fun to watch, when they are in Colorado. The Mets strike out way too much, don't put the ball in play enough, and don't execute in critical situations. Kevin Long was brought in to make Curtis Granderson more comfortable. Yet Granderson, who is having a really good season, is hitting .150 against southpaws. Now I thought THAT was supposed to be the kind of thing Long was here to assist with. And I don't really give too much credit to the batting coaches...other than philosophies. But the fundamentals are just not there. They are not there in the field, they are not there at the plate. And the lack of consistency could end up being the downfall for this team. Although, since the veterans were brought in - Juan Uribe, Kelly Johnson, and Tyler Clippard - things seem to have changed for the positive. Especially at the plate. But the Mets time in Colorado should not lull anyone into a false sense of security.

And it's no fun to watch the Mets starting staff, which has been so good all season, get smacked around. It is not too often a pitcher is happy to get a victory because they ONLY gave up eight runs in 5 1/3 innings of work. Well, Jonathon Niese must have been ecstatic to get off the Coors Field mound with his ERA only ballooning to 3.80 AND getting the victory. It can't be any coincidence that none of the three young guns - Matt Harvey, Jacob deGrom, Noah Syndergaard - were scheduled to pitch in Denver this time around. Logan Verrett gets to start Game 3 - what a place to make his first major league start. I wonder what he was thinking watching the first two games. But then, he pitches in Las Vegas and that ain't easy either. Gotta wonder if Dillon Gee is thinking, "Fine...go ahead and wear my number 35 while I am being forced to toil away down here. I don't need to get MY ERA any higher than it already is."

Meanwhile, the Mets will head to another bandbox in Philadelphia. And at least they don't have to worry about one thing - Chase Utley is not around to punish them any longer.