Take Me Out to the Ballgame?

I love going to baseball games...I really do. But sometimes it can literally be such a painful experience. It is hard to coordinate schedules because of everone's busy lives so every so often I am able to drag my wife, begrudgingly, kicking and screaming, to a Mets game. She doesn't understand anything about baseball...rather...she is an old-fashioned rock and roller. Our brains work so differently. Diana will have music playing and point out the intricacies of a piece and say, "Did you hear that...did you hear that unbelievable transition?" And I just sheepishly reply, "Uh...well...that was niiiiiiiiice?" Admittedly, I don't even pretend to be able to hear what she hears. But then, she will not see, or understand, all of the intricacies of what is happening during a baseball game...all of the things you can't possibly see going on when you are watching on television instead of seeing everything happening before your eyes. 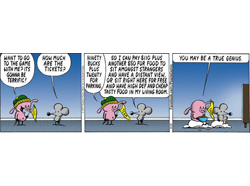 Instead, she analyzes the walk-up music that plays when each player comes to bat. The Mets are taking the field and all she can say is, "Oh my God, that's Emerson Lake and Palmer!" She was truly disappointed to find out that Kirk Nieuwenhuis wasn't playing, and even more disappointed when she found out he is not even in the ballpark and toiling in the minor leagues with no chance of getting into the game. "But he is so good, they play Foghat for him!"

Walk-up music. That is what is important now. But that is not what makes it a painful experience. I actually get a kick out of explaining why the players wear the uniforms they wear, why catching a ball in the air before it hits the ground is an out - even if it's a foul ball, and why people don't actually want to change their seats because foul balls come in their direction.

What makes it painful is getting there...the absurd cost of the tickets...the obscene cost of horrible food...and then getting home.

We had gone to two games already this season and after the Mets' great road trip, I though it would be fun to go to the Red Sox series over the weekend. Ticket prices were insanely expensive. I attempted to get the same seats for which I paid $75 each in April, and they were $185 each. The same seats! So for two seats, parking, gas, tolls, and food...it would have been about $550 to see the Mets play the Red Sox on Saturday. The fact that the team was coming off a road trip where they finally put on an offensive display that would rival the Gashouse Gorillas, and there was a celebration of the 1986 World Series and they were giving away a Jesse Orosco bobblehead, made for a hero's welcome that drew a sell-out crowd on Saturday and a total of 122,000 people over the three-game set.

OK, so taking Diana's suggestion, I switch gears and get tickets for Monday's game against the lowly Phillies and to hopefully see the Mets continue their onslaught they began the week before. And, of course, back to $75 for the great seats again. It just reminded me of a local Krauszer's that I would frequent. This one store it seems is the only one to carry chocolate Charleston Chews. Wow...a favorite of mine since I was a kid. So when I discovered it, I purchased one. It cost me 75 cents. A few days later, I sent my son, Eddie, in to get me one. He came back and told me it was $1.25. Days later I went back in and the man charged me $1.15. I tried again, and the next time I was charged $1.65. Now, I KNOW the price of gas constantly changes, as a former commodities trader I GET that. But Charleston Chews? What exchange are THEY traded on? When I told the owner that I had been charged 75 cents the first time and various prices since with a high of $1.65, all of a sudden, he came down with amnesia.

So now I am thinking, are the Mets actually doing the same thing with their ticket prices? Maybe it's me, but I have a ticket stub from 1969, for a field level box seat and the price printed on there is $3.50. That is three dollars and fifty cents. And does anyone remember that you were able to finish your milk and cut up the carton and have a free ticket courtesy of Dairylea?

Well, we already had a horrible experience trying to get  to the last game against the Rockies at CitiField on a Thursday afternoon...a noon start. What could be a 45-minute ride, door-to-door, became a two hour and 45-minute odyssey. It began at the George Washington Bridge and continued on through and over the Whitestone Bridge. No matter what route I attempted to take, I ran into massive traffic. It was almost like the scene in The Truman Show where no matter which way he turns, there is a pile-up in front of him. (Helpful HInt: Don't stop for Venti Starbucks before leaving for a trip to CitiField. There are no bathrooms along the way.) We ended up getting to the game in the bottom of the third inning. Diana wanted me to turn around and bag it. "Why would anyone show up to a game after it starts?" I told her that there are plenty of people who arrive late and we were listening to the game on the radio. But I too was not only disappointed, but getting pissed. What IS it with New York City? You can't get ANYWHERE.

So we decided that we were not going to get there late again, and we left at 3 p.m. for a 7 p.m. start...knowing that we were also dealing with the start of the U.S. Open tennis tournment next door to CitiField. Oh yeah, that made a BIG difference. This time I decided to go through Staten Island and Brooklyn to get to the Van Wyck Expressway. Once we got over the Goethals Bridge into Staten Island...smack...right into a wall of traffic. Thirty five minutes to travel 1 1/4 miles on the Staten Island Expressway. The Belt Parkway turned out to be a breeze...but then...the infamous Van Wyck Expressway. They say that nobody ever beats the Van Wyck (according to Elaine Bennis)...and neither did I.

We DID get to the field in time. In fact, we had time to get something to eat before the first pitch. Two pretzels and a water - $18.00. That's eighteen dollars. The same thing at the Philapelphia Pretzel Factory? $2.50. That two dollars and fifty cents. It is just ridiculous. Please tell me...how do families do it?

OK...the game was great. Bartolo Colon pitched a masterpice. And young Michael Conforto and Curtis Granderson backed him up with home runs for a 3-1 victory.

It was a quick game and we were actually in the car by 9:50. In the car by 9:50...but still sitting in the parking space at 10:40. Nobody was moving...NOBODY. Lot attendants finally arrived to direct the traffic and we were able to escape just at the clock ticked 11:00. I put Diana through enough so I decided to jump on the Triboro (now RFK) Bridge and head south on FDR Drive, scoot around Battery Park and head to the Holland Tunnel. Theoretically, it should have been a breeze. Turns out, there was not enough xanax for my passenger...not one, but TWO lanes were closed from E 94th Street all the way down to E 61 street. Another 45 minutes in traffic with people blasting music from their vehicles. There was definitely no longer any conversation going to come from the passenger seat and there are now foot prints embedded in my dashboard.

Walked in the house two hours and 20 minutes after the game ended.

Bring your wife? Perhaps when Nieuwenhuis is recalled?