For All You Non-Believers

There is a lot of excitement building around the Mets. Not since the mid to late 1980's has the focus been on the Mets rather than the Yankees. Sandy Alderson kept promising that 2015 would be the year that the Mets would be significant. In late June, everyone was calling for the man's head and screaming, yet again, for the Wilpons to sell the team. Late June...hmmm. 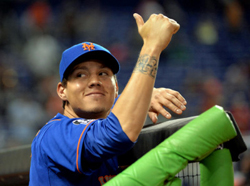 Oh yes, on June 24 the Mets were, for the only time this season, under the .500 mark sitting in second place behind the Nationals in the Eastern Division. So get ready, because for everyone that doubts that there is something good happening, just give this some thought. Most people were picking the Mets to win 71-75 games this season and predicted the Nationals would dominate and run away with the division title. The beauty of baseball is...anything can happen and nothing is a sure thing. Oh, and as Yogi said, "It ain't over 'til it's over."

The Mets opened the season running out to a 13-3 record, thanks in big part to an 11-game winning streak which matched the team record. Mind you, the Mets also had 11-game winning streaks in 1969 and 1986. They were in first place ahead of the favored Nationals who stumbled out of the gate. But the Mets lost their captain, David Wright, and they went into a swoon going 23-34 over the next 57 games. That put them at 36-37 on June 24. They managed to right the ship a bit, as the starting rotation kept them in each and every game, and every once in a while, when things looked like they were about to fall apart, something would seem to happen that would just keep it going for another day.

That other day was July 30. That was the day after. The day after the story leaked that Wilmer Flores was headed to the Milwaukee Brewers, along with Zack Wheeler, in a move that would bring Carlos Gomez back to the Mets. While Gomez was on a plane tweeting pictures of joy about the trade, Flores showed his disappointment while remaining on the field and letting all of the raw emotions hang out. It became the trade that never happened and it turned Flores into a cult hero. And he has done nothing to disappoint. On that day, the Mets were 52-50, hovering over the .500 mark and 4 1/2 games behind the surging Nationals. And then it happened. On July 31, hours after the trade deadline passed, the annointed folk hero hits a game-winning walk-off home run against the Nationals.

That day would also bring a high caliber player, Yoenis Cespedes, but without losing any player of significance. The other moves made by Alderson, the acquisitions of veterans Juan Uribe, Kelly Johnson, and Tyler Clippard, would prove to be great additions and certainly strengthened the club.

Down the stretch, over the last 35 games, they have what should be an easy schedule with the exception of the Nationals for two series and the Yankees for one. If they continue to do what they have done thus far, the main objective would be to keep everybody healthy, make sure none of the young pitchers runs out of gas, and the team stays hot and energized.

For all the preseason naysayers and pessimists, who'd a thunk it? And for all of those calling for his head, Sandy kept his promise.