The fact is that Tyler Clippard has not been effective for about a month. Regardless of "the formula" for getting to Jeurys Familia in the ninth inning, just like players have to make adjustments, so too must the managerial staff. Terry Collins, very deserving of his Manager of the Year Award, has made some ill-fated decisions during the series and leaving Clippard in after he walked the first batter was one of them, if not putting him in the game at all with the slimmest of one-run leads. 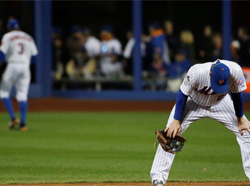 Prior to that decision, he left Steven Matz - who pitched a marvelous game - in one inning too long with cost the Mets a run. Thankfully, Jonathan Niese and Bartolo Colon were able to combine to bail him out and preserve the one-run lead in the sixth.

The REAL reason that the Mets lost the game was because they could not muster any offensive attack whatsoever. They got two monster home runs from Michael Conforto...that's it. Perhaps because they WERE so monstrous everyone believed the Mets were mounting some kind of attack. But they weren't. Oh yeah...they were able to "manufacture" a third run thanks to one of the few miscues by the Royals and get a "gimme" sacrifice fly.

Chris Young, a one-time Met, really went pitch for pitch with the young Matz who was wowwing everyone in the broadcast booth. With the exception of the two Conforto shots, he really held the Mets hitters at bay, just like he did in Game 1.

Murphy is NOT the culprit and the reason for the Mets to be on THEIR asses right now. The reason for the Mets to be outdone and in the precarious situation in the series is quite obvious. They are NOT hitting...not hitting in the clutch...not making things happen. The Royals have actually taken a page out of the playbook of the old Cardinals of the 1980's. They put the bat on the ball...they don't strike out. They push the limit on the basepaths...always going first to third or just taking the extra base. They make all the plays in the field...and don't make bonehead plays...well...they did by allowing Wilmer Flores to score on the sac fly...but that is a rarity. And the Royals have proven that their bullpen...even with their closer out of action...have a far superior group than the Mets. So "getting to the bullpen" is definitely better for the Royals than the Mets.

One error did NOT put the Mets where they are. Their overall play and the Royals advantage with their hitting and their bullpen is the reason the Mets have their backs against the wall. And if it weren't for Mr. Murphy, the Mets would not be in the World Series in the first place. Because other than Murphy, nobody was hitting. He, himself, got the Mets to this point. Seems much like the injustice put on Carlos Beltran...because if he didn't have his monster season in 2006, he wouldn't have been standing at home plate to watch Adam Wainwright drop in strike three on that fateful day against the Cardinals.