I think that the acquisition of Juan Uribe and Kelly Johnson is a good start to get spare parts and shore up the bench and give Terry Collins some needed flexibility. They are proven veterans who have been in pennant races before and have been clutch. However, the need for a BIG bat is overwhelming.

I would be less concerned if Lucas Duda were being as productive as he was in the first month of the season or the second half of last season. Wilmer Flores has quieted down and Daniel Murphy has been a shell of himself. So NOBODY is hitting. 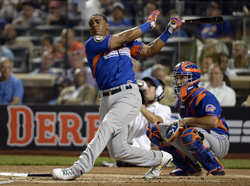 At least, if you want to go back to 1969, Clean Jones was hitting .340 and leading the league in hitting for a short time, and Tommie Agee hit 26 home runs (in an age when that was a lot) from the leadoff spot, and Art Shamsky hit .300. Then they brought in Donn Clendendon who hit some big home runs in part-time action sharing time with Ed Kranepool at first base. The Mets don't have anyone who is hitting. I would be more impressed if they brought in a Yoenis Cespedes who could provide some power.

And I am sick of hearing that it is the ballpark. Jimmy Rollins continues to hit home runs against the Mets AT CitiField. So you can't tell me that none of the Mets should be able to hit 20-25 home runs. The point is...the Mets need a big bat...or two...if they want to make a run. The pitchers can't pitch a shutout every time out...and even if they do...you still need to score a run to win a game.

Michael Conforto does look impressive. He has a very compact and level swing. I think he should be ok with big league pitching. But he will need protection. And if Kirk Nieuwenhuis can hit like he has since he returned to the Mets then he will be a valuable asset. Like I said...bring in a Cespedes type player and the team could make a move.