Piazza Takes His Place With The Greats

Ken Griffey, Jr. making it to the Hall of Fame is a true feel good story. It seemed he was destined for greatness. He was a kid among men, roaming the clubhouses in the major league parks, hanging around like any son who tags along with his father to the office. He learned a lot while hanging out with some of the greatest who ever played the game. But that kid was a natural, and was the very first pick of the Seattle Mariners in the 1987 draft. And he didn't disappoint. He was a superstar from the very beginning, and played like a kid playing in the sandlots, always playing hard, getting dirty, and having fun.

Mike Piazza making it to the Hall of Fame is also a feel good story. But unlike Griffey, his career ventured on a different path. While Griffey was the Number One pick in the first round of the draft, Piazza was way at the other end, selected in the 62nd round of the 1988 draft by the Los Angeles Dodgers. The 62nd round! 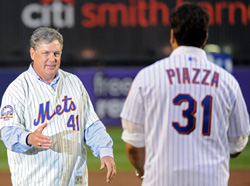 Piazza's rise to stardom was not easy. He was not drafted out of high school. Tommy Lasorda, a family friend, just happened to have a friend at the University of Miami in Coach Ron Fraser. Fraser took Piazza on the team as a walk-on, really as a favor to Lasorda.

Piazza was not the burly, well-built catcher when he arrived in Coral Gables. Rather, he was a lanky first baseman who did not even make the road trips with the team. In fact, he was one of the freshmen whose job it was to carry equipment and do "buckets" during batting practice. That's the lowly job of collecting all of the baseballs hit during BP and bringing them back to the BP pitcher behind the screen. He made a mere nine plate appearances that year, getting one base hit as a Hurricane in 1987.

He made the decision to transfer to one of the local community colleges in Miami, Miami-Dade North, for his sophomore year, which gave him a chance to play regularly and become eligible for the next amateur draft. He began to flourish at Dade-North, hitting .364 while playing a decent first base. Lasorda convinced the Dodgers to draft him near the end of the draft to get him into the professional ranks. And he convinced Piazza to learn to become a catcher, which would give him more of an opportunity to make it to the big time.

Piazza burst on the scene with the Dodgers and began mashing the ball, hitting for a high average and with a lot of power, and established himself as a serviceable backstop. After he came to the Mets, his average dipped a bit...but his power numbers increased. And amazingly...he never struck out 100 times in any season. Given the frequency with which the Mets strike out...well...that is just unfathomable.

A lot of people will complain about his play behind the plate. However, he actually handled the pitching staff well. The pitchers loved to throw to him. He did a great job of blocking pitches and blocking the plate. Okay...so he did not throw very well. But how many catchers really "throw" well. I loved Thurman Munson...and so did a lot of other people. But Munson was one of the worst arms behind the plate. And I guarantee nobody would have a problem with Munson behind the plate.

Piazza's prowess at the plate, whether standing next to it with a bat in his hands or crouched behind it with the gear on, earned him the right to have his place in the unltimate shrine among the greats in the game. And it is fitting that, even though he produced some astounding numbers in his seven years with the Dodgers, that he enters the Hall joining Tom Seaver as the second Mets player enshrined in Cooperstown.

And now the talk turns to the retiring of numbers. As the Mets have been very judicious, actually very stubborn, about retiring the numbers of players, Piazza's election to the Hall of Fame should now make it a done deal that Number 31 will be displayed next to Number 41 on the wall at CitiField.

There has been a lot of banter about other numbers to be retired now too. I have read some people say that Keith Hernandez (17) , Gary Carter (8), Darryl Strawberry (18), and Dwight Gooden (16) should all have their numbers retired.

I am all in favor of Hernandez having Number 17 retired in his honor. His arrival was on par with Seaver's arrival in the 60's and Piazza's arrival in the 90's. All three had such an impact that it literally turned the franchise around, from hapless to hopeful and to winners. And truthfully, if Hernandez hit more home runs, HE would be in the Hall of Fame. Unfortunately, first base is a power position and he just didn't have the power. The fact is, he was the Ozzie Smith of first basemen. And he knew exactly how to play the game...something most players today don't know. It's an injustice that the Mets have allowed so many others to don that Number 17.

I am on the fence about Carter because he did have a huge hand in the Mets success. But his big years were really in Montreal and he went into the Hall as an Expo. So while I wouldn't mind seeing his number retired, it wouldn't be a crime if it weren't. As for Strawberry and Gooden, I can't see how anyone would want THEIR numbers retired. They were both a disgrace to the organization. They both had Hall of Fame talent and just threw it all away, both leaving town under bad circumstances. Why not honor Bobby Bonilla and Vince Coleman too?

But I digress...Piazza's place among the greats is well-deserved and his place next to Seaver should be forthcoming soon. However, I disagree with anyone that suggests that there should be a statue of Piazza erected outside CitiField. I am sorry...but as much as I am happy for my fellow Hurricane (well he did buckets and had one hit), and appreciate what he AND Hernandez did to bring the organization back from the dead during their respective tenures...there will only be ONE man who could EVER be deserving of the honor of a statue. And that honor is long overdue to The Franchise, Tom Seaver.