You would think that after the Mets made it all the way to the World Series in 2015 that the fan base would be somewhat satisfied and have some faith in Mets management and General Manager Sandy Alderson. After all, after taking hit after hit in the media and on every fan blog across the internet, Alderson proved to be correct when he said that the team would be playing meaningful baseball late in the season. None of the so-called experts picked the Mets to finish with a record of over .500...let alone get to the World Series. Oh ye have little faith.

And now the talk is, as always, about how cheap the front office is and that they refuse to spend any money. The fact is...the Mets HAVE shown a WILLINGNESS to spend money...and they HAVE spent money. 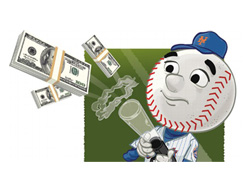 There are a number of players that the Mets have spent money on...HUGE sums of money. Some deals were good...some were not so good...and some were just awful. Let's take a look at the Mets free agent signings.

George Foster...remember him? He was the start of the big name signings. He was the guy who hit 52 home runs in a single season for the Big Red Machine of the 70's and the Mets gave him a big free agent contract. The trouble was that his power was already dwindling and Shea was never a home run hitter's paradise (except if you were Dave Kingman). He was never the power source that was expected and was literally dumped off the 1986 team when he accused Davey Johnson of racism after he was replaced in leftfield by Kevin Mitchell.

How about Vince Coleman? Better known as Vincent Van Go of the speed demon Cardinals of the 80's. The Mets decided to give Coleman a big contract to lure him away from their division rivals. It was like buying a car with bald tires. Vincent Van Go suddenly became Vincent Van Slow and after some questionable behaviors was sent packing.

Foster and Coleman were disappointments...but how about the real busts? The Mets shelled out really big money for...wait...what was his name...oh yeah...Big Mo Vaughn. Remember that guy? Huge man, Huger contract. Hardly played. He left his best days in Boston. He was hurt and never did anything to earn a dime of his contract. Want something more recent...fans are STILL reeling over Jason Bay. At least Bay did everything he could to try and earn the contract he signed. Unfortunately, he too left his best days somewhere over the Green Monster in Beantown.

Some signings weren't truly busts. Some...like Willie Randolph, Brett Butler, and Tom Glavine...were just past their primes and really at the end of their careers. At least we can say we got to see glimpses of Glavine performing like a true Hall of Famer in the making. The same can be said for Eddie Murray who did have a productive season as a Met on his way to Cooperstown enshrinement.

I wanted to avoid including him...but you just can't when it comes to this subject. Why? Because they are STILL paying this guy. Bobby Bonilla...everybody beckoned for the Mets to sign this guy. And he was a local product who had a really nice career going in Pittsburgh. But the guy with the big head got a big contract...following Barry Bonds out of The Steel City. At least Bonds became a huge hit in San Francisco. OK...he may have done some steroids to GET that huge. But Bonilla was not a huge hit with the Mets...only a huge headache. And after he was shipped out, the Mets even gave him a second chance by bringing him back for a second go round of his nonsense. Money well spent!

The front office HAS spent money...can't you see that? They even went out and got Francisco Rodriguez...K-Rod...when they needed a closer. OK...so he was also a head case and he was soon shipped out. But they paid out big money to acquire the best reliever on the market.

And when it REALLY mattered this front office opened up the coffers to sign some guy named Mike Piazza. Bet you forgot about that, huh? He was acquired by trade, but had to be signed as a free agent. And he could have gone anywhere. But the best hitting catcher of all-time, the newest Hall of Famer, was signed as a free agent by the Mets. How about Carlos Beltran? Yeah, yeah, yeah, he took a called third strike. But he was outstanding as a Met and could very well be the next Met to be elected to the Hall of Fame. Beltran was wooed by every team after his All-Star career with the Royals and post-season run with the Astros. He was courted by the Yankees. But the Mets got him. And finally, the Mets rewarded David Wright, the captain, with a nice sized contract of his own. I know, it's a shame about the injuries, especially the most recent issue with his back, but the fact is that they DID heap a huge sum of money to retain their captain.

The truth is the Mets have a plan and they are sticking to it. It has, thus far, proven to be the right thing to do. How can anyone not see that? How can anyone say that the Mets are not willing to spend money when they put out an offer to Ben Zobrist, only to see him take less money to go to Chicago and be reunited with his former manager, Joe Maddon?

The signings of Asdrubal Cabrera and Alejandro De Aza may not be glitzy, but make the Mets better than they were a year ago. So does letting Daniel Murphy go. I can't believe I am saying that because I have always been a big Daniel Murphy fan. I just love his hard-nosed, down and dirty style of play. However, he was limited in ability and he handcuffed the Mets because of his lack of versatility. I always thought he would be better off in the American League and would instantly be an All-Star. But Neil Walker is definitely comparable as a hitter, with slightly more power, but with a lot more defensive skills. And the fact that Walker and Cabrera are switch hitters give the Mets even more balance.

The Mets could use another big bat. And while everyone was clamoring for the Mets to acquire others at the trade deadline, I was hoping for Yoenis Cespedes. I always loved watching Cespedes and he is a five-tool talent. But he can also be a malcontent too. It is quite obvious that no team is rushing to sign this huge talent. Otherwise he would have been signed back in November. Power hitters are a valuable commodity, just like power pitchers. Would I love to see Cespedes back? Absolutely. Would I give Cespedes a five-year deal? Never. One to two years...yes. Three years...maybe. That's it. Because the odds are it will be a bad deal after Year Two.

I am truly tired of hearing that the Mets are not willing to spend money. They have spent money...for better or for worse...but they HAVE spent it. And they SHOULD spend it...but it should be spent WISELY.