So for all of the harsh criticism...HARSH criticism...of ownership, Yoenis Cespedes is returning to the Mets. So for all of those who were shouting out that the Mets don't spend money...well...they did...yet again. The fans have done all of the over-the-top clamoring before...and...well...let's just see.

I am glad the Mets did what they had to do to bring Cespedes back. He brings a presence and dimension to the team that alters the look of the lineup and creates a dynamic that actually makes everyone else that much better. The lineup was fine without him, but it could be downright dangerous WITH him. 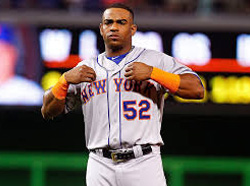 Cespedes is coming off a career year which included a hot streak that can only be compared to a run that one Carlos Beltran had with the Houston Astros before signing with the Mets. He IS a legitmate five-tool threat but he is NOT in the same league with Mike Trout of the Angels or Bryce Harper of the Nationals. He is maybe a notch or two below them, but what he does is create that "fear" in the Mets lineup.

Now, looking at the way the team is currently constructed, it is actually better than it was when the season ended in 2015. The return of Cespedes, Bartolo Colon, and Jerry Blevins and the additions of Neil Walker, Asdrubal Cabrera, Alejandro De Aza, and Antonio Bastardo make for what amounts to the strongest and, more importantly, balanced team probably since the 1985-88 era.

The expectations will now be nothing less than becoming the 2016 version of the 2015 Kansas City Royals. Returning to the World Series and, this time, WINNING. That's a lot of pressure. But it should be a fun summer.

And, of course, the fans got their way. Like I said, I am a Cespedes fan and wanted him at the trade deadline last season, and wanted him back for 2016. What I did NOT want to see is another situation of signing a player to a long-term contract, only to see it as a mistake soon after, and then have the same fans who were vilifying ownership for not spending then cursing management for keeping the guy around. Let's hope Cespedes does not turn into Bobby Bonilla...or Oliver Perez...or Jason Bay. The fans booed those guys out of the park and out of town. Do you think Yankees fans are happy with the contract of Alex Rodriguez...or the Giants fans with the contract of Barry Zito...or...GULP...the Angels fans with the contract of Josh Hamiltion?

The word is that the contract contains some safety provisions, including a buyout after the first year. So perhaps Sandy Alderson created a sitiation that made everyone happy...for now.

They spent, they conquered, and nothing less than a championship, a World Series championship, will be acceptable. Fans can be so tough to please.