While it seems like the season has just begun, the first month is already in the books. And while it’s still way too early on in a long baseball season, as we learned last year, there appear to be some clear indications of what lays ahead for the 2016 Mets.

Let’s take a look at some of the takeaways from the first month: 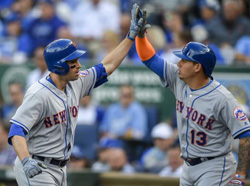 1. The catching position is not as strong as once believed. The Mets were touting that they had two No. 1 starting catchers and were trying to figure out how to get them both in the lineup at the same time…even to the point of tinkering with both Travis d’Arnaud AND Kevin Plawecki for a potential position change. Neither of them are solid at the plate. d’Arnaud is always swinging for the fences and Plawecki still looks overmatched at times. And neither is adept at throwing out baserunners.

2. Lucas Duda is a VERY streaky hitter and an awful first baseman. He is better-suited as a DH in the American League…and would probably lead the league in home runs if he played for the right team.

3. Neil Walker may have hit a bunch of home runs early on, but he is not the natural hitter Daniel Murphy is. However, he is as steady as they come and he truly knows how to play the game. So as second basemen go, he is a definite upgrade but he is merely a place holder until Dilson Herrera is truly ready.

4. Asdrubal Cabrera has been more reliable in the field than reports indicated. He definitely brings some intangibles to the table.

5. The double play combination of Walker and Cabrera is definitely an upgrade. They definitely make the team better defensively up the middle.

6. David Wright is a shell of his former self. He still comes up with the big hit every so often…and he still gets on base via the walk. But how long can the Mets go with a singles hitter who strikes out way too often in the Number 2 slot in the lineup from a position that demands a power hitter? If he hits 20 home runs that would be great…but he doesn’t even look like a 15-homer guy any longer.

7. Michael Conforto is the real deal. He and Yoenis Cespedes could/would be a great 3-4 combo in the lineup for a long time. I still think he should be moved to first base and play Cespedes in leftfield with Juan Lagares playing in center…as long as Lagares can hit at least .260.

8. Signing Cespedes was the right thing to do. He has done everything any GM could have hoped for. IF he decides to stick around…as I said already…he and Conforto would make for a great 3-4 tandem in the heart of the order. But there still needs to be someone to protect Cespedes the way Cespedes protects Conforto. Walker – even with his HR outburst - is NOT a reliable No. 5 hitter to protect Cespedes.

9. Curtis Granderson is still a great asset to the team. His average may be down, but he truly has heart and plays with such passion. And his demeanor never changes. He is always upbeat and always, always hustles.

10. Lagares once again looks like the stellar centerfielder that won him a gold glove in 2014, but he will never hit enough to break into the starting lineup with the Mets…unless…of course…Conforto is moved to first base.

11. Wilmer Flores is still a very reliable player who can hit…and hit with power…and he is one of the few Mets who does not strike out a lot. However, the “plan” to make him the super sub has failed. He needs to play every day or at least almost every day. If each infielder were getting one day off a week, then it might work. But Terry Collins has him strolling up to pinch hit game after game and there is no way most players, especially young players, can get going like that. It takes a unique player to be able to play that role. Matt Franco did it well…Joe McEwing was great at it. But Collins tried it with Kirk Nieuwenhuis and he failed miserably at it. And Nieuwenhuis was probably ruined by it. Flores should play more…and given Wright’s tenuous position with his back…he should be the heir apparent.

12. The Mets bench is just as weak as last year. Eric Campbell may be able to fill in at every position but he is also an automatic out.

14. Bartolo Colon is still having fun.

15. Jeurys Familia and Addison Reed make a great team at the back end of the bullpen. Getting to them seems like a problem.

16. The Mets have three starting pitchers that throw one way, but hit the opposite way. Syndergaard and Jacob deGrom throw righthanded yet hit lefthanded, and Matz throws lefthanded but hits righthanded.

17. The Mets still strike out at an alarming rate. They don’t put the ball in play. They rely too much on the home run ball. They may hit a bunch of home runs…but they are not the Chicago Cubs.

18. Speaking of the Cubs, their lineup is downright scary. The Mets lineup is NOT as scary.

19. Daniel Murphy will not hit .400 for the entire season…I don’t THINK he will anyway.

20. Riding into spring training in a different exotic car every day or, better yet, riding in on a horse, is not an advisable thing to do. Keeping a low profile is usually best, especially when you become the hunted. Cockiness usually NEVER serves a team well. Baseball is a long season and anything can happen. University of Miami baseball legend Ron Fraser once said to me, “Little Guy…it is but a short drop from the penthouse to the shithouse.”