deGrom Benefits From a Grand-y Night

Jacob deGrom throws another gem in the bandbox more commonly known as Oriole Park at Camden Yards...lowering his ERA to 1.98. Curtis Granderson blasted two home runs and had a great catch in the 8th inning. 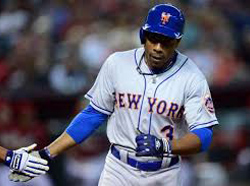 Thankfully the Mets got some insurance runs in the top of the 9th inning courtesy of some awful play by the Orioles. And they needed it as the Mets had their own blunder in the field and then when Jeurys Familia was finally brought in to relieve Tyler Clippard, he proceeded to issue two bases loaded walks to provide the agita.

DeGrom goes to 12-6 on the year and, if not for Mark Greinke, would be the leading candidate for the Cy Young Award.

Granderson is doing his best "Tommie Agee" impersonation. He now has 22 homers on the season, all from the leadoff spot, and 7 of those homers actually coming leading off the game - a new Mets record.

For all the complaints of having Granderson in the leadoff spot, he is actually having an exceptionally productive season. He hasn't stolen many bases, and he has hit below .200 against lefties, but he has gotten on base enough to be in the leadoff spot, compiling a .345 on base percentage.