Thor Puts KC On Their Asses

Well...the Mets needed to make a statement. And Noah Syndergaard did just that. With his first pitch he put Alcides Escobar right on his ass. Regardless of what the outcome was going to be, Thor made it known that the Royals hitters were not going to be so comfortable. And although he had a few hiccups, Syndergaard was able to put the Royals hitters away when he needed to most. And there were a LOT of broken bats flying around everywhere.

And for all of the idiots talking about benching David Wright in favor of Juan Uribe, Captain America made a statement of his own, launching a two-run bomb in the bottom of the first inning to give the Mets a 2-1 lead. And let's not leave Uribe out of it. After being idle for over a month and not even being on the post season roster for the NLDS and NLCS, he made his first appearance and shot a run-scoring single to the opposite field in the midst of the Mets four-run outburst in the sixth inning. 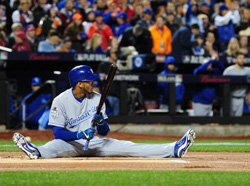 Wright not only had the big blow, but he also turned in a couple of spectacular plays in the field. Meanwhile, Curtis Granderson made a fine running catch to take away an extra-basehit and hit a laser beam over the rightfield fence to give the Mets a 4-3 lead that they would never reliquish.

I know, I know...ya gotta believe...but ya really gotta love the hustle and enthusiasm that Granderson brings to the ballpark everyday. With all of the talk about Jeurys Familia as the closer...and Yoenis Cespedes arriving and fortifying the offense...it has been Granderson that has remained the consummate upbeat professional...always working hard...and always with a positive demeanor. He is like the modern day Ernie Banks.

And with all of the talk about Derek Jerek on the other side of town, Wright has done everything to earn the same loyalty from the organization and the fans. The fact that all of the experts had him hanging up his jersey a few months back, and to see the effort he puts in just to be on the field, has got to be one of the "feel good" stories of the year.

It was also heart-warming to see over 50,000 fans, players, umpires, broadcast team...stopping the game and all standing together for a moment to recognize all of those who have suffered from cancer. Sometimes there are things more important than the game itself.

Oh yeah...and the Mets won 9-3. So they are doing exactly what was done in 1986. Losing Game 1 by one run, Game 2 by 6 runs, and winning Game 3 by 6 runs. What matters more, though, is if Steven Matz can duplicate Syndergaard's performance and keep the Royals from peppering away at them. And...oh yeah...shut that guy up in the visitors' dugout. Moustakas I think his name is. A little chin music there too...and a few more broken bats would be nice.