Listening to sports talk radio drives me crazy. I actually did sports talk radio so I have been on the other side of it. And quite often I just tune in to listen to WFAN to see what people have to say...most of the time...it's just to pass the time...or better yet...distract me when I am in the car sitting in the god forsaken traffic.

Anyway...it just cracked me up when I heard a caller...who is apparently a regular...say that David Wright, the captain of the Mets...the face of the franchise...the Derek Jeter of Queens...the guy who re-upped with the organization instead of taking a lot more money and going elsewhere...the poor soul who is dealing with a debilitating back issue that he has to prep hours for each day just to put his shoes on...should be benched to get Juan Uribe into the lineup. 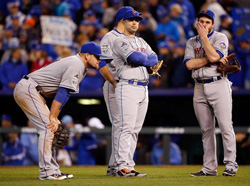 I know that if I were the host, I would have simply hung up and not even entertained or addressed such an incredulously ridiculous statement. CLICK! Instead, Mike Francesa, who I actually find to be the most annoying sport broadcaster ever (except for Russ Salzberg) allowed him to persist and the two of them went on and on and on about it.

I have to be honest, all talk show hosts have their regulars that call in...or that they HAVE call in...in case it is a slow show so that there appears to be a constant flow of calls and constant chatter. I always had someone calling in to intentionally argue with me which would ultimately get other callers to call in and chime in with the argument. So I get that. But on a busy day with all of the legitimate calls...why in the world would Francesa allow a call like that to go on. But then...maybe there are people out there that ARE that...well...just stupid and ignorant.

And OK...the Mets lost again in Game 2. They lost with Jacob deGrom...and all the deGromination hype...after losing Game 1 with Matt Harvey...and all of that Dark Knight crap. But they lost the first two games in 1986 behind Doc Gooden and Ron Darling - at home no less - and everyone surely remembers what happened back then.

The fact is that the Royals went through Harvey and deGrom the way the Mets went through Clayton Kershaw and Zack Greinke in the Dodgers series. It IS possible that good hitting CAN beat really good pitching.

I know the Cubs powerful hitting attack appeared to be a mere myth and the Mets rotation went through the order pretty much like a hot knife through butter. But the Royals are a completely different team than the Cubs. In fact, they are at opposite ends of the spectrum when it comes to hitting philosophy. The Cubs hitting played right into the Mets strength, while the Royals approach seems to have the Mets pitchers literally baffled.

Now the Cubs...for all of their bluster...hit a few less homers than the Mets but struck out 200 more times than the Mets did in 2015. OK so that is 500 more times than the 1969 Mets. But that is not the point. The point is that the Royals don't strike out. They whiffed 963 times and drew 383 bases on balls. So they don't walk as much and they don't strike out as much as the Mets or any other team. They put the bat on the ball and spray it around the field. They don't wait for pitches and they certainly don't miss pitches that are in the strike zone. That is why Harvey only had two strikeouts in Game 1 and deGrom only generated three swings and misses in Game 2.

Perhaps if the Mets young pitchers were a little more seasoned, they would know how to make the necessary adjustments. They have not faced a team like the Royals this season. And while the Royals are certainly beatable - any team is - the key is always to make the adjustments when needed.

Oh yeah...remove David Wright from the lineup in favor of Juan Uribe? What a freakin' .... . I will let everyone else finish that sentence. Or better yet...the call-in number is...