Three's Company But Four's A Crowd

Okay...so now that everyone got what they wanted...and the Mets ownership opened their wallets and re-signed Yoenis Cespedes...now what? The Mets now have four outfielders for three positions and there is not yet a DH in the National League.

When Cespedes was brought to the Mets at the trade deadline, there were circumstances that were much different than they are right now. Sandy Alderson was in the midst of revamping the support staff...bringing in valuable veterans like Juan Uribe and Kelly Johnson for the bench and Tyler Clippard and Addison Reed for the bullpen. But he needed to do something about the outfield situation because Michael Cuddyer, who was signed as a free agent almost immediately after the conclusion of the 2014 season, was injured and greatly underperforming. And Juan Lagares had not taken the next step forward after a nice 2014 season in which he won a Gold Glove and looked like the second coming of Andruw Jones in centerfield. It was quite apparent that he was a shell of himself in centerfield, not getting to balls he would have gotten to easily the year before, and his feared rifle arm was reduced to that of a water pistol. We later found out that he was suffering from an injury that vastly curtailed his abilities. 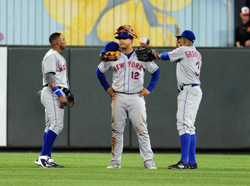 So Michael Conforto, merely a year off the college campus, was brought up to be what everyone thought was a quick cup of coffee just to help get the team through a rough patch of depleted troops. Little did everyone, including Alderson, know that Conforto would perform on such a level that the Mets heirachy could not, in good conscience, send him back to the minors.

Enter Cespedes. It gave Terry Collins a huge boost in the middle of his lineup. And he didn't have to worry about where to play him because Cespedes, himself, went to Collins and said he would prefer to play centerfield. And that was truly convenient since Lagares was not nearly at full strength and Curtis Granderson was not the preferred choice to move over from rightfield, and Conforto was considered (wrongfully) of being a subpar outfielder.

Cespedes does have the athletic skills and abilities to be a capable major league centerfielder. He has above average speed and a Roberto Clemente-type arm. He may not take the best routes to get to every ball...but he makes some spectacular plays. Unfortunately, he will always be remembered for the fly ball in Game 1 of the World Series that he misplayed and kicked into an inside-the-park home run. (Yeah, right, home run...if it were LITTLE LEAGUE) But that is what comes with being in the New York spotlights. He will always be analyzed, re-analyzed, and over-analyzed about everything...especially when singles are dunked in from of him because he tends to play a little deeper than most centerfielders.

Granderson is a converted centerfielder who was pretty good in his own right, and has played a great rightfield for the Mets. His arm is probably the weakest of all of the Mets outfielders, and certainly NOT the kind of arm a rightfielder should have, but he makes up for it with his positioning and hustle. Granderson has also proven to be a truly valuable pickup for the Mets, both as a player and a leader in the clubhouse. He has transformed himself from a dead pull hitter shooting for the short porch in Yankee Stadium to a catalyst (with power) at the top of the lineup. He has truly been what any team could hope for...and hasn't seemed to slow down much.

Conforto...well...what can you say about this guy? He is just a few at bats past the rookie status plateau and has very little professional experience. However, he held his own against Major League pitching, even made necessary adjustments when other young players might have floundered, and even had some huge moments both at bat and in the field in some very high pressure situations. He didn't get much at bats against lefties in his time with the Mets, but he did extremely well against southpaws in the minors.

Lagares was making great strides in 2014, winning his Gold Glove, and improving everyday at the plate. But somewhere along the line he got hurt and it seems like everyone has soured on him...or...they are just so enamored with the thought of Cespedes that he has become the forgotten man out there. But the reality is that, if Lagares is healthy again, and he continues his progress, he very well COULD be the ultimate centerfielder. And New York is known for its prominent centerfielders...remember...Willie, Mickey, and the Duke?

A lot of people may think that it makes for a nice problem for Terry Collins to have four outfielders. And, of course, he can do what he did most of the time down the stretch. He can start Conforto, Cespedes, and Granderson against righties and sub in Lagares to center and move Cespedes to left late in the game; and start Cespedes, Lagares, and Granderson against lefties and keep Conforto on the bench. Well...that scenario worked because Lagares was injured and Conforto was a young kid that needed some protection (so everyone thought). Lagares is supposedly back at full strength and Conforto has shown he does not need to be shielded from southpaw pitching.

So now what? It will be up to Collins to figure it out. That's HIS job. And Alderson's job. But I like to play GM just like everyone else. And I think that, if Conforto IS the real thing...and I think he IS...he should be moved to first base. He could very well be the Mets version of Don Mattingly. Not that he could not be a competent leftfielder...because thus far he has proven all of the skeptics wrong...but it would get him out of the outfield and allow him to relax more at first base and not worry about misplaying fly balls in leftfield.

That creates other problems, though. What to do with Lucas Duda? Well Duda has some great power but he is also very streaky and not a very good first baseman. He would be better-suited as a DH and could probably command a nice return from an AL team craving some lefty power for an anemic lineup. There ARE suitors out there. And that also leaves the question of some young guy named Dominic Smith who has been playing to rave reviews in the minors. He, apparently, plays first base like some guy named Keith Hernandez and is another hitter in the same mold as Mattingly. Only time will tell...but will a move by Conforto then block Smith's path? Oh...and what happens if...dare I say...David Wright can no longer play third base? He is already showing signs of having problems, having to alter his throwing motion. The captain has to have a place to play, right?

There has been a lot of talk recently that the topic of bringing the DH to the National League was heating up and gaining a lot of momentum. Having the DH would solve a lot of these issues for Alderson, Collins, and the Mets. But, for now, there is no DH and, except for interleague play, is not an option. I hate the DH anyway. But the reality is that someone is going to be the odd man out.

I love that the Mets brought back Cespedes. I love Conforto and think he will turn more into the next Mattingly and less like Mike Vail. I love watching (a healthy) Lagares patrol centerfield with the style and grace that hasn't been seen out there since a young Andruw Jones played for the Braves. And Granderson has always been one of my favorites, ever since he was with the Tigers...I was glad to see him sign with the Mets two years ago.

It would be great to see all four of those guys in the lineup at the same time, and, with the alignment of Cespedes in left, Lagares in center, Granderson in right, with Conforto at first, it would give the Mets the best defensive option. But as much as I would like to be, I am NOT the manager, I am NOT the GM, and it is NOT my decision. If I had just won the Powerball...