Spring is in the air. It has to be. Baseball is back. Well…it is in Florida and Arizona. I am sitting in NYC where it is 27 degrees and windy…conditions that beg to ask the question as to why I ever left South Florida.

Football may have the “Monday Morning Quarterback” but the banter around baseball is omni-present. And while it IS enjoyable to hear, read, and enjoy the diatribe, it is also amusing to encounter the absurd. Not all fans are educated about the game. That is crystal clear. But seeing some of the ideas spewed out there is almost cringe-worthy. Spring training is well underway and so is the absurdity.

I just noticed a post on Facebook that calls for the Mets to sign Brett Lawrie to play third base now that David Wright’s status is questionable. What is WRONG with people? What is this person thinking? 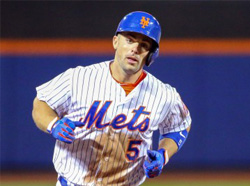 David Wright deserves the utmost respect in the world. He is the best all-around player the Mets have ever had. He put up numbers that, if he had stayed healthy for his entire career, could have made him a sure-bet Hall of Famer. Most importantly, he was…wait…HAS BEEN…the reliable, no-nonsense, model citizen, ideal captain and teammate for the Mets. He has been to the Mets what Derek Jeter was to the Yankees. There is no question about his heart and determination. Unfortunately, for the man affectionately known as Captain America, his career has not gone the way of the beloved Jeter, but, instead, another beloved Yankee captain, Don Mattingly.

I have never pulled harder for any Mets player than David Wright. However, it actually pains me to say it, but his time is up with the Mets. Do I want to see him go? Absolutely not. But he can no longer be the Mets third baseman if this team is going to be successful.

At this point of his career, what one can expect from Wright is to be a .260-.270 hitter, with 15-20 homers, and 60-70 RBI if…IF…he were to play sparingly and not face any pitcher that will now overmatch him due to a loss in bat speed. Truthfully, while he was, for a time, a Gold Glove caliber third baseman, his throwing has been a detriment for a very long time. If the Mets were an American League club, the best scenario would be to put the Captain at the DH spot and just let him swing away for 135-140 games and he would probably be effective for another two-three years. But the Mets are NOT an AL club and Wright does not have the safety net to cling to like Jeter and Mattingly did in their later years.

There is absolutely no need to bring anyone in to play third base on this club. The Mets have the best options in house…which should not even BE options. Jose Reyes is probably still the best “athlete” on the roster even at HIS advanced age. He can still create havoc. And while he lost a bit of range at shortstop, he is more than capable of playing an above average third base and has a better arm than Wright ever had. Reyes is NEEDED offensively and he should just be placed at third and let him have fun again.

Everyone is forgetting about Wilmer Flores. Flores is not a shortstop…not for the Mets anyway. But ask any AL team if they would want a shortstop who could hit like Flores and they would take him in a heartbeat. Flores was thought to be the heir apparent to Wright. He is definitely a major league hitter and he tears apart even the best southpaws. Unlike everyone else on the Mets, Flores does NOT strike out a lot. He is unlike most hitters with power…he does NOT strike out a lot. He is a contact hitter. Wow…a contact hitter with pop! What a concept! Flores is not only capable, but he is necessary as he CAN play all four infield positions. And there are enough questions about the health of the Mets infielders that he could very well play a significant role throughout the year.

In addition to Wright, the other question marks are second baseman Neil Walker and first baseman Lucas Duda. I loved Walker when he was a Pirate and applauded the acquisition. But he was on his way to a career year last season before being befallen by an injury so serious that no other team, NOT ONE, was interested in taking a flyer on him for 2017. And Duda, while you have to love his moon shots, his defense and back are two liabilities that make him unreliable.
Shortstop Asdrubal Cabrera gave the Mets everything they could have asked for and more in 2016. But how much does Cabrera, himself, have left in the tank?
The X-factor here is Ahmed Rosario…the highly touted shortstop prospect that is waiting in the wings but getting a lot of reps in the early spring training games and, so far, holding his own. If he proves that he deserves to stick around, he WON’T be a reserve player, that’s for sure.

So there are some things to think about with regard to the Mets infield.

From my perspective, the best Plan A would be to:

1) Put Reyes at third base and let him run free;
2) Let Cabrera again be the everyday shortstop until such time he proves he can’t do it on a consistent basis;
3) Let Walker attempt to be the everyday second baseman until his injury prevents him from doing so;
4) Give Duda one more opportunity to be the Mets first baseman and have Wright platoon with him when he is healthy enough to do so;
5) Make sure Flores plays five games out of seven or eight at the four different positions in the infield to give each regular a blow.

Now let’s look at Plan B which is a bit more radical but could make a lot of sense:

1) Put Reyes at third base and let him run free;
2) Trade off Cabrera and give Rosario the shortstop job;
3) Release Walker and give Flores the everyday job at second base;
4) Trade Duda off to an AL team, get whatever you can for him (some team out there will take a flyer on his power ability at the DH slot), and move Michael Conforto to first base.
5) Let Wright come back slowly and give Conforto days off against the Madison Baumgartners of the league, and, if he can throw, let him fill in a game here or there at third base.

This creates a trickle-down effect for the outfield. To continue with the radical (or maybe not so radical moves)…get rid of Jay Bruce for whatever you can get for him and allow Curtis Granderson to move back to right field. Allow Juan Lagares to patrol centerfield regularly until he proves he is NOT the Gold Glove outfielder he was a couple of years ago. And groom Brandon Nimmo to take over for Granderson in right.

It’s fun to play General Manager…especially when it is below freezing in the greatest city in the world! BRRRRRRRRRRR!